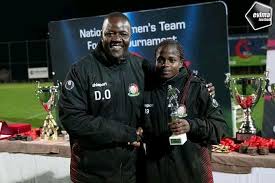 Harambee Starlets, on Tuesday night lost to Ghana in the Turkish Women’s cup played at the Gold City Sport Complex.

The Ghanaian side bagged the winning goal at the 85th minute with Starlets managed to maneuver a goal before the closing of the game.

Harambee Starlets coach David Ouma has lauded his team for their performance where they came third behind Chile and Ghana.

Starlets beat Northern Ireland 2-0 in their opening match before falling to Chile (5-0) and Ghana (3-1), with the coach noting that there are a lot of positives to be picked from the experience.

He further applauded Sylvia Makungu for her performance in her debut for the National team during the tournament.

Starlets took home Bronze, behind Chile and Ghana and are expected in the country tomorrow morning.

The team now shifts its focus to the match against Tanzania in their Africa Women Cup of Nations Qualifiers in April.

The winner of the first-round tie will face off with either of DR Congo or Sao Tome and Principe in the second and final qualifying round.