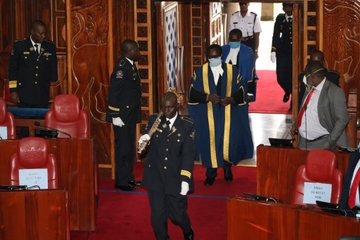 The Senate has surrendered Sh200 million from its budget to aid in the fight against novel coronavirus disease.

The sittings resumed with the Leader of Majority Kipchumba Murkomen tabling a motion for the formation of an ad hoc committee to spearhead the interventions against the spread of the novel virus.

Murkomen proposed that the committee be led by Nairobi Senator Johnstone Sakaja .

The committee is tasked with ensuring there is adequate testing and medical equipment,isolation centres, continuous supply of food and other essential goods at affordable prices, and also financial support to the vulnerable groups.

Other emergency needs that the committee will address include measure Sto ensure learners continue with their studies , ensure protection and safety of health care workers and other frontline responders to civid 19 and protection of residential and commercial tenants .

The committee will report back to the house on Tuesday next week after ensuring public participation is carried out in a manner guided by the health ministry regulations.

The legislators reconvened after a two-week break, with only 28 senators being allowed into the Senate debating chamber with the day’s business being centred on the global epidemic covel covid-19 corona virus.

The decision to limit the number of Senators accessing the chamber was arrived at following a House Business Committee meeting yesterday as the House leadership considered a raft of measures to ensure social distancing guidelines recommended by the World Health Organization and the Ministry of Health are complied with.

With the senate allowing only 28 members today, this will be the new norm as the House Leadership shall similarly in subsequent Plenary sittings, only allow 28 Senators in the Chamber until further notice.

The Sergeant-at-Arms have been directed to ensure that only the 28 designated Senators attend the Plenary sitting.

Senators who are not part of the 28 designated Senators are requested not to come for the sitting as the 28 Senators shall be the only Senators who shall be allowed into the Chamber.

Senate speaker announcement several raft measures that the house will be adhering to in its bid to curb down the virus.

Following the president directive on the national curfew, the Senate Plenary sittings shall commence at 2:30 p.m. and end no later than 4:30 p.m. This is to allow Members and staff to travel and arrive at their places of residence before the 7:00 p.m. curfew.

Already, Lusaka and his National Assembly counterpart Justin Muturi have volunteered 30 per cent of their salaries to go towards the fighting disease.

Several state and public officers have also surrendered a percentage of their salaries to help combat the virus.