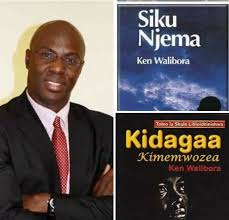 Celebrated Swahili writer and journalist Ken Walibora Waliaula has died, after a vehicle apparently run him over on Landhies Road in Nairobi.

The distinguished scholar is said to have been killed in the freak accident on Friday last week, and his body taken to Kenyatta National Hospital mortuary. The celebrated author was rushed to the facility for treatment where he succumbed to the injuries sustained during the accident.

Tributes have been pouring in following the Professor’s demise with many remembering his books.The scholar has over 40 titles to his name. Among the most famous of these are Ndoto ya Amerika and Siku Njema. The latter was a secondary school set book between 1997 and 2003.  Kidagaa Kimemwozea, another popular book was also used as a compulsory text in secondary schools in 2013.

Among other notable books, the author wrote, include Kufa Kuzikana, Tuzo, Ndoto ya Almasi and Damu Nyeusi co-edited with Said A. Mohamed.

Ken Walibora Waliaula was born on January 6, 1964, at his parents’ home in Baraki, Bungoma. His family moved to Kitale and later Cherangany with the Trans Nzoia region later on shaping up the idea for his book Siku Njema.

56 year old Ken Walibora holds a Ph.D. in Comparative Cultural Studies from the Ohio State University, USA and had worked for among others the national broadcaster KBC and NTV.

Apart from anchoring and authoring books, he also taught as a lecturer in the US.  A teacher by profession, Walibora served as a Swahili high school teacher between 1985 and 1986. He later worked as a probation officer at the Ministry of Home Affairs between 1988 and 1996.

“President Uhuru Kenyatta has described the late Walibora as a polished broadcaster and prolific writer whose literary works will continue to inspire future generations,” a statement from State House reads.

In his message on Twitter, Deputy President William Ruto said Ken was a man of insight and brevity; a driving force with monumental energy and vision when pushing Swahili laingage related issues

“We will miss his great depth of knowlegde, positive orientation , wit and resilience”, Dr. Ruto added. “Our thoughts and love goes out to Prof. Walibora’s family, friends ,the academia and the media fraternity. Rest in peace”

While conveying their deepest sympathies to the family, friends and colleagues of Prof. Ken Walibora, the Media Council of Kenya (MCK) said that until his death, Walibora was a lecturer at the Riara University School of International Relations and Diplomacy, where he served as a director of the Global and Language Studies Centre.