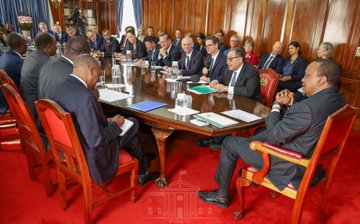 President Uhuru Kenyatta has expressed satisfaction with the progress made in the implementation of a framework to coordinate external development support in the country.

The President thanked development partners for supporting the government towards the achievement of its socioeconomic agenda, saying the coordination of externally funded projects is key in ensuring their success.

“We appreciate the support we have continued to receive from the World Bank, the European Union, the United Nations and all our development partners,” the President said.

The Head of State was speaking at State House, Nairobi, during a meeting with development partners and the Cabinet sub-committee on development where he was briefed on the progress made in the implementation of the framework for coordination of external development support.

The President welcomed the support from development partners in the war against corruption pointing out that the government will not waver in its commitment to fight the vice that has become the greatest enemy to the country’s progress.

World Bank Country Director Carlos Felipe said the framework for coordination of external funding of development projects has provided an avenue where development partners have engaged positively and provided support to the government and the private sector.

“With the pace of reforms by the Government of Kenya, we look forward to working more closely on the economic front as well as addressing challenges like the Coronavirus,” Felipe said.

The development partners assured President Kenyatta of their continued support to tackle the desert locust invasion and the threat posed by the global outbreak of Coronavirus.

Japanese Ambassador to Kenya Ryoichi Horie assured of Japan’s commitment to support Kenya in tackling the desert locust challenge saying the importation of chemicals to tackle the invasion is ongoing.