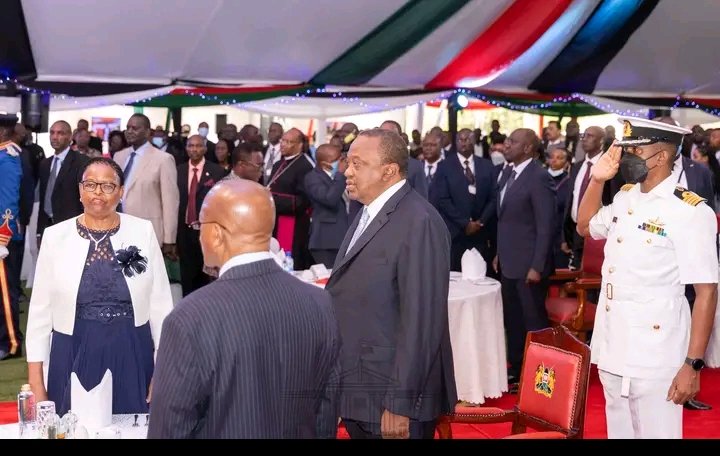 The 19th National prayer Day saw the speakers rally behind messages of peace unity and tolerance as the country goes to pols in 73 days.
Religious leaders who led the ceremony called on politicians to preach peace in their campaign rallies bearing in mind that elections come and go.

Bishop Emeritus David Oginde  said the uncertainty over the General Election in the country has served to work against the progress of the nation and called on Kenyans to change their mindset on elections.

The EAK chair has also said the election period has brought about fear due to the competition between the contestants in which all the sides are not willing to accept the results of the election.

He said that elections can be handled differently if Kenyans and the leaders go about the period of transition peacefully.

On his part,  Anglican Church of Kenya ACK Archbishop Jackson Ole Sapit  called upon Kenyans to to love and for one another during the electioneering period to prevent the country from sinking into hatred and enmity.

Ole Sapit also asked Kenyans to be tolerant of one another despite their different ideologies.

Nyeri Archbishop Anthony Muheria in his remarks,  called for selfless leaders who are ready to sacrifice their own interests for the betterment of the country.

” We are pleading with GOD almost fearfully. Because, like the disciples in the sea of Galilee, we find ourselves facing a stormy weather. We see elections coming and it’s  a storm brewing, Our ship is being rocked by the waves..by the rising exchange of ungodly words and incitement. The ship of each one of us.. The ship of the average Kenyan is being rocked by anxiety. It’s being irritated by the character of our politics. By our leadership. A leadership that claims to be, yes, people of GOD. People of Faith. God-fearing “, Muheria thundered.

Addressing the leaders drawn from all political divides, President Uhuru Kenyatta has said that he will ensure there is a peaceful transition of power after the next election insisting of his commitment to continue the tradition.

The  President  called on the electoral hopeful to accept the outcome of the elections and be peace ambassadors.

“I wish everyone who is vying the best of luck knowing that they will always be one winner and our prayer is that we shall accept and be able to move forward and leave to fight another day,” said President Kenyatta.

“We are aware that the tempo of our politics is beating at an increasing rate day by day. We know the task of building a nation is passed from generation to generation. I intend to do just that,” he said.

President Kenyatta mentioned that for 19 years, the national prayer breakfast has brought Kenyans together in humility and thanksgiving as children of God and asked the nation to once again affirm the power of togetherness and unity regardless of political and religious alignment.

“My earnest prayer is that this unity of purpose and our shared humanity that has been displayed today will endure in every aspect of our lives going forward, ” he added.

In her remarks, Karua called on politicians to match their words with actions to ensure that the country remains peaceful and united before, during and after the election.

“It is my prayer that, we as leaders, compete in ideas and not insults. This will lessen the tension in the nation, by the way we treat one another, ” Karua said.

“Prayer without action is not real. How I pray that our prayers are matched by action. If we do that, we definitely will have peaceful elections, a peaceful transition and a nation that stands together. God bless Kenya”, Karua added.

In his remarks, Dr. Ruto  begged for forgiveness  from fellow politicians whom he may have wronged, and similarly declared that he had forgiven those who had wronged him.

“Serving as the Deputy President, I may have fallen short of the expectations of my boss, the president. I ask you for forgiveness,” Ruto said.

Dr. Ruto stated that he believes that whoever will be elected at the August polls will be God’s will.