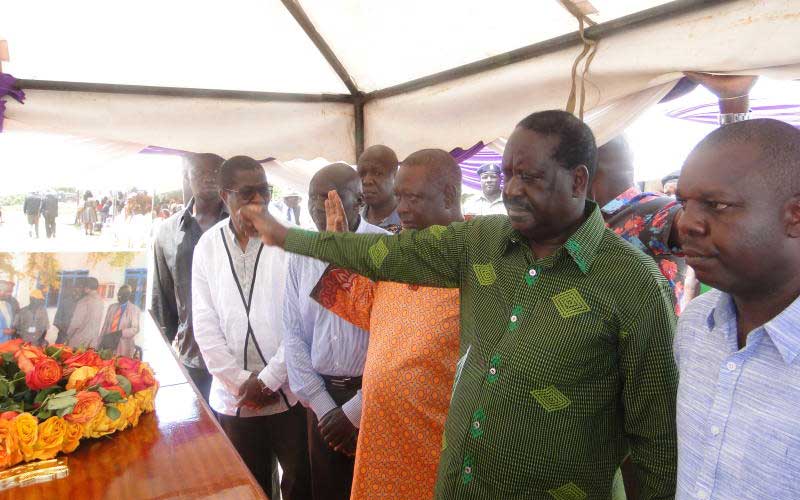 Various speakers celebrated him for putting the interests of his constituents first, and for being a dedicated and honest leader.

According to Malindi MP Aisha Jumwa, Dori was championing for the unification of all Coast leaders to work towards achieving a common goal of development.

“He has severally called peace meetings for all Coastal MPs,” she said.

Likoni MP Mishi Mboko said the late MP will forever be remembered for his big heart and the love for the people.She said his absence will be felt for he has brought a lot of development in Kwale.

ODM Secretary General Edwin Sifuna said the deceased was a very remorseful man and used to seek peace whenever there was a problem.

ODM party chairman John Mbadi, was however heckled by mourners during the burial after he linked Deputy President William Ruto with the Sh39 billion shilling fake arms deal, in his speech during the burial.

Dori died at the Aga Khan Hospital in Mombasa where he was admitted at the Intensive Care Unit.

The MP had reportedly fallen sick on Sunday and was rushed to the hospital. The 42-year-old legislator was a second time MP for Msambweni. His ODM Party leader Raila Odinga in his condolence message said Dori, who had displayed exceptional leadership during his tenure, had succumbed to cancer . He was battling blood cancer, leukaemia.

According to a relative, Hamisi Mkungu, the deceased fell ill last Wednesday and was rushed to hospital on Friday evening after his condition worsened.

Mkungu said Dori was admitted to Intensive Care Unit (ICU) when he failed to respond to treatment.

Dori has been buried this evening in accordance with Muslim burial customs.