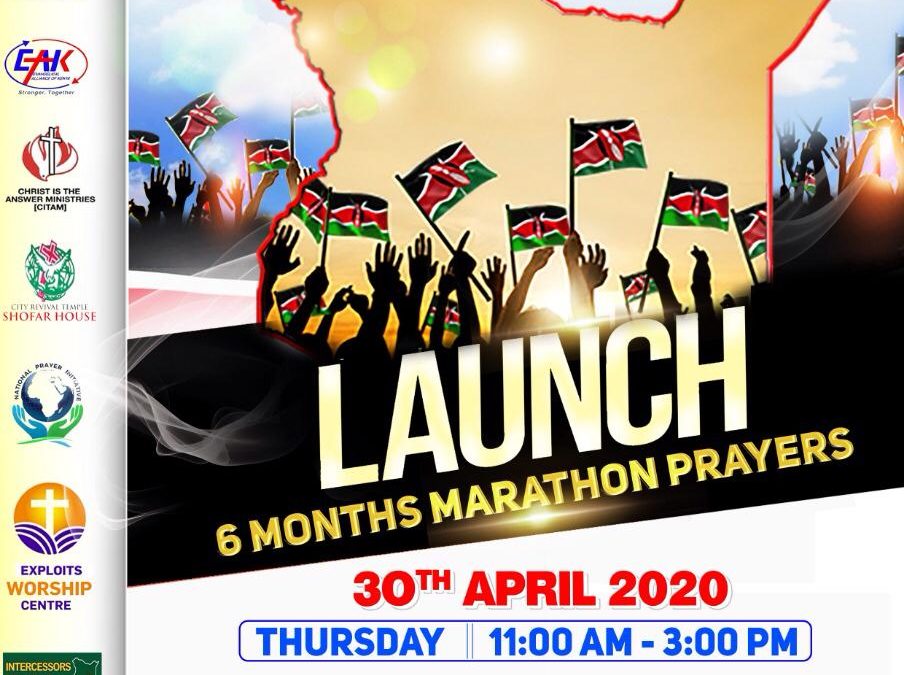 The Kenya Church Response to Prayer has launched six months of marathon prayers organized by the Evangelical Alliance of Kenya.

During the prayer sessions conducted online for the sake of the nation of Kenya, the church concluded prayers that ran from the 1st of April, the first part the Kenya Church Response Prayer Manual launched by the Evangelical Alliance in consultation with various church leaders with a burden to pray for one-month period.

The manual aimed to unite the church in prayer, to provoke deeper repentance and intercession, to raise a corporate national altar for the release of Gods mercy and grace to secure the land against the enemy.

The other objectives were to galvanize the nation into focused prayer by harmonizing and unifying prayer netweorks, to sustain lonmg term prayer agenda for the nation and to catalyze the revival agenda in the nation.

The first part of the prayer was launched on 31st March 2020 and brought togtehr over 200,000 people at various levels with testimonies received.

The Kenya Prayer Response Manual was compiled through the efforts of the prayter committee of the Evangelical Alliance of Kenya Christ Is the Answer Ministries among other players.

Today’s event is a precedence for the six-month prayer marathon seeking to intensify more intercessors to call for a breakthrough for the land of Kenya.

Meanwhile, after a successful one-month prayer organized by the Evangelical Alliance of Kenya EAK, that saw over 200,000 participants coming on board to pray for the nation and issues affecting Christians, the alliance has organized yet another prayer manual for six months.

Speaking to HOPE FM, the EAK coordinator Bishop Othniel Mwabili says the second phase of corporate prayers is seeking to bring onboard National Council of Churches of Kenya NCCK and Kenya Conference of Catholic Bishops KCCB among others in a bid to build an army for the Lord to pray for Kenya.