Kenya and Germany to partner in transfer of knowledge and skills 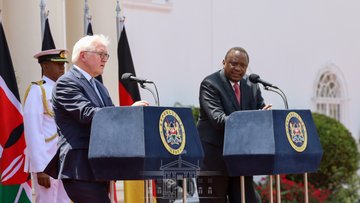 Kenya and Germany today announced that the two nations will partner in the transfer of technical skills and education focusing on applied sciences.
The announcement was made at State House, Nairobi following a bilateral meeting held between Kenyan and German delegations led by President Uhuru Kenyatta and his visiting German counterpart Frank-Walter Steinmeier.

Key among several initiatives announced by the two Heads of State is plan for Germany to assist Kenya in setting up an applied sciences university and the European nation’s commitment to continue supporting technical and vocational training in the country.

The German Head of State announced his country’s plan to support Africa in combating the current desert locust invasion which he said threatens the continent’s food security.

He said his country will provide 3 million Euros to the  United Nations Food and Agriculture Organisation (FAO) to support ongoing efforts to defeat the locust invasion in several African nations including Kenya.

On technology, President Steinmeier said his country was keen on partnering with Kenya’s vibrant technological startups saying the country had distinguished itself as Africa’s Silicon Valley through its globally celebrated innovations.

The German leader who is in the country for a three day State Visit is accompanied by representatives of the German business, education and sports sectors.

“We will work together in applied sciences. There is still a gap for those who want to go further and become our future innovators. The applied sciences university will not just be for Kenya but for the entire region,” President Kenyatta said.
He noted that three centres of excellence have been established under the Kenya-German TVET Initiative.

On Kenya’s prominent role in regional stability, President Steinmeier said Germany respects the balancing role Kenya has played in the region over the decades especially its interventions Somalia and South Sudan.
“Kenya is still the anchor of stability and we will continue partnering for peace,” said the German President.

Commenting on AMISOM, President Steinmeier said “there should be no setback in the normalisation process in Somalia”.

President Kenyatta asked for German support in Kenya’s bid for a non-permanent seat on the United Nations Security Council during elections scheduled for June this year.
“We will stand for the collective will of the international community. Peace and security are at the centre of our policy,” President Kenyatta said as he urged the German Government to ensure that Kenyan immigrants are shielded against laws that forbid dual citizenship.

The Kenyan leader said the historic state visit by the German President, the first of its kind to Kenya, will help strengthen ties between the two nations.
On arrival at State House, President Steinmeier was received by the President Kenyatta before he inspected by a Guard of Honour mounted by the Kenya Airforce. He was accorded full military honours including a 21-gun salute