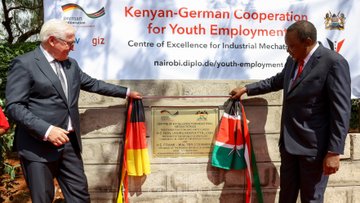 President Uhuru Kenyatta and German President Frank-Walter Steinmeier today launched of a 39.4 million Euro youth empowerment vocational training programme that will equip the youth with requisite skills to enable them contribute effectively to the country’s development.

Speaking at Kiambu Institute of Science and Technology (KIST), President Kenyatta termed the launch as a big boost to the country’s quest to empower its youth with technical know-how needed to grow the country’s economy.

“Today, our quest to foster skills development in Kenya once again gains greater momentum, as we unveil the partnership between the Government of Kenya and the Federal Republic of Germany,” the President said.

The second phase will be worth 13 million Euros out of whichGermany and Kenya will contribute12 million and one million Euros respectively.

During the event, President Kenyatta and his German counterpart also laid the foundation stone for a centre of excellence in the training of industrial mechatronics at KIST.

President Kenyatta thanked the Federal Republic of Germany for supporting Kenya in its efforts to improve the technical and vocational training in the country.

“This occasion is a symbol of the great collaboration between our two countries.  Through your government, the youth who form the majority of our population, will be better equipped with relevant skills necessary to help them play a big role in national development,” he said.

The President emphasized that equipping the youth with relevant technical skills will bring about the socio-economic liberation that forms the greatest task of the current generation.

“That is why, Your Excellency, as part of my Administration’s “Big Four” Agenda, we are prioritizing manufacturing and housing as key to sustainable job creation for our young people,” the Kenyan leader informed the visiting German President.

President Kenyatta also encouraged the youth to take advantage of the educational opportunities offered under the programme as well as the robust scholarship programme under the German Academic Exchange Service (DAAD) to gain skills that will enable them to earn decent incomes.

He also assured of his personal and government’s support for the establishment of the German-East Africa University of Applied Sciences.

“This, I believe, will be a milestone towards building the capacity of our trainers in TVET so that they are able to deliver in the Competence Based Education and Training (CBET) both in Kenya and in the entire region,” President Kenyatta said.

On his part, President Steinmeier said the laying of the foundation stone at KIST symbolizes the beginning of a new a robust partnership between Kenya and Germany.

The German President said he was impressed by the Government of Kenya’s dedication to focus on boosting youth employment and developing the Kenyan manufacturing sector, which is one of the goals of the Big 4 Agenda.

Deputy President Dr William Ruto on his part, said Kenya is proud that under President Kenyatta’s leadership enrolment in TVET has increased by 300 hundred percent in a span of seven years.

“This is no mean achievement both in terms of development of infrastructure and also in student numbers,” Dr Ruto said.