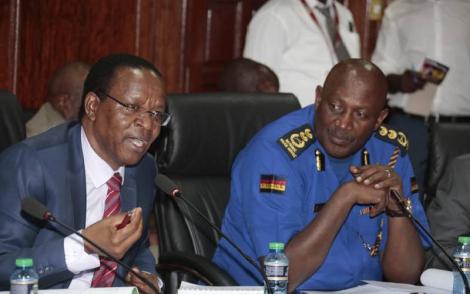 Interior Principal Secretary Karanja Kibicho and Inspector General Hillary Mutyambai have been grilled over a suspicious increase in the price of helicopters which were bought in 2018 but have been unable to fly.

A report had indicated that the ministry, under Interior Cabinet Secretary Dr. Fred Matiang’i, had tendered for the helicopters at Sh4 billion, but increased the cost of the three Police Airwing helicopters by Ksh 906,100, 927. This was contained in the 2017/18 audit report.

Appearing before the National Assembly Public Accounts Committee (PAC), Kibicho and Mutyambai explained the additional spending, arguing that the extra amount was spent on upgrading the helicopters.

Kibicho further informed the legislators that the difference was occasioned by errors made during the tendering process.According to him, the ministry had realized the aircraft required the upgrades after the purchase as they had not been listed in the initial tender documents.

The committee chaired by Ugunja MP Opiyo Wandayi, however, described the additional expenses as unnecessary.