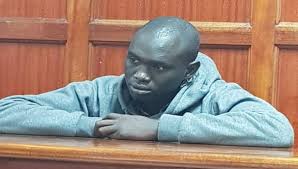 A Lavington Security guard who is alleged to have strangled a  Nairobi University student  Leader and dumped his body at Central park along Nyerere road has been arraigned in court .

Spencer Kipkorir Kosgei  was arraigned before Resident Magistrate D Ndungi is alleged to have committed the offence with others who are at large.

In an affidavit filed in Court by investigating officer CPL Philiph Bett an officer attached to Kilimani DCI was seeking 10 days to detain Kosgei in order to complete investigations.

The officer told Court the suspect was arrested on 11th march and taken  to Kilimani Police station for the  murder of Elisha Otieno Odek alias Ras.

According to the affidavit Brighton Tonny reported that his brother the deceased was admitted at KNH hospital intensive care unit on the night on Wednesday 4th after being beaten.

Brighton further stated that he received information through phone from someone whose identity cannot be disclosed for security purposes that the deceased was arrested by the suspect in acompany with other security guards on the night of 4th march and was being beaten as they alleged to take him to Central police station.

“On the same night unidentified good Samaritans rescued the deceased from central park and took him to KNH where he was admitted for treatment,”he stated

A Postmortem was conducted at Chiromo mortuary by pathologist Dr PM Ndegwa yesterday where he was of the opinion that the deceased cause of death was multiple unjuries due to a blunt force trauma plus neck compression due to ligature strangulation.

The prosecution claimed  that the suspect went into hiding when he committed the offence,He was unreachable on phone even by his employer.

The defence told the Court  that there were no compelling reasons  as to why the suspect should be detained for 10 days.

He has been detained until tomorrow 2:30 pm.