Echesa wants his detained vehicle back, says he is ‘tired of using public transport’ 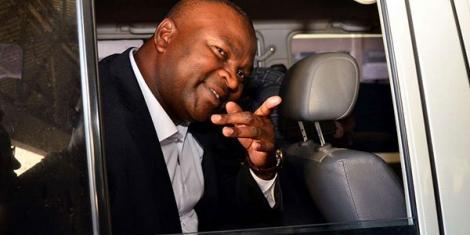 Embattled former Sports Cabinet Secretary Rashid Echesa is demanding to have his confiscated vehicle back, lamenting that he has been forced to use public transport and walk to his destinations since detectives from the Directorate of Criminal Investigations (DCI) confiscated his motor vehicle

“Continuing  to detain my motor vehicle the respondents have rendered me imobile,subjected me to embarrassment and loss of dignity in that am now forced to use public transport and sometimes walk”said Echesa in the application.

He says the said motor vehicle is his personal property the respondents are entitled to protect his dignity yet they have subjected it to vandalism and rot by having it detained by the DCI.

In court documents echesa has attached an agreement for the sale of the said Range Rover between him and Qutbi investment limited based in Nairobi.

According to the agreement Echesa paid a deposit of sh10M and another Sh 10 m before the car was handled to him and the balance of 3M he was supposed to pay for a period of five months.

The car was purchased on 4th 2018 and the total cost was 23m according to the agreement.

The Range rover is a 2018 model which Echesa claims he is the registered owner of the vehicle.

In the application filed by his lawyer Bryan Khaemba Echesa also asks court to release his two pistols and ammunitions saying beeing the former cabinet Secretary of sports he his entiltled to security.

He claims confiscation of the said firearms is compromising his security.

The prosecution told the court that they have not been supplied with the application and could not proceed with the hearing,they also told the defence to collect witness statements from the investigating officer.

Principal magistrate Kennedy Cheruiyot ordered the application to be heard on 23rd March.