Echesa, three others plead not guilty to Military firearms scam 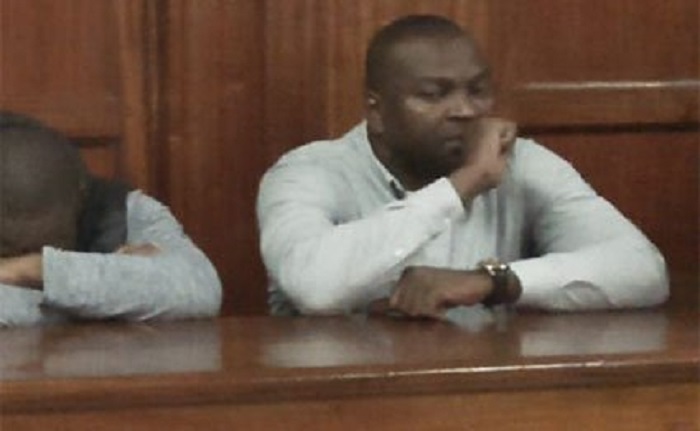 Trouble continues to brew for the former Cabinet Secretary for sports  Rashid Echesa as the 39billion Saga rages on . Echesa who spent his weekend behind bars ,appeared before the Milimani law court today, and denied twelve related counts based on the  military fire arm scandal.

Echesa was  charged along with Daniel Otieno ,Kennedy Oyoo and Clifford Okoth. The four are said to have conspired without any authority, to make documents relating to a restricted tender number HC2019-2016 from the Ministry of Defense contrary to section 393 of the penal code.

The former sports CS  and the other three spent their weekend in police custody, after their efforts to get bail were futile. They faced 12 counts among them conspiracy to commit a felony, making a document without authority, obtaining money by false pretense, as well as impersonating a public service officer.However Echesa denied all the charges read to him by chief Magistrate Kennedy Cheruiyot.

Echesa’s  legal practitioners wants the case filed before the Jomo Kenyatta International Airport law courts, where prosecutors had been asked to detain him for 21 days .

The former CS was dismissed from the ministry of sports  in march 2019  when President Uhuru Kenyatta handed over his docket to Amina Mohamed.

On 21st of October last year ,it is said that Echesa and his co -accused received shs 11.5 million From Kozlowski Bruno ,whom they lured to award a contract based on the supply of Military equipment to the Ministry of Defence forces.

Detectives are said to have surveyed Echesa’s home yesterday where they were believed to be reviewing a surveillance footage at Deputy President William Ruto’s  Harambee house Annex office ,where Rashid Echesa is said to have held a meeting tied to the fire arm tender.

Echesa’s lawyers asked the court to reject the affidavit, terming it a violation of law, that is, if the court could accept it.,The legal practitioners criticized the prosecution for arraigning the four today, and going against the JKIA court that directed the session should happen on Tuesday.

Deputy President William Ruto was also dragged into the 40 million infamy ,which necessitated the distribution of military surveillance equipment. However DP Ruto has dissociated himself from the scandal ,adding that this is a campaign to stain his reputation by his political rivals. His reaction has triggered many views from the social media with angry Kenyans urging him to declare his stand.

Meanwhile Echesa and the other four have been remanded as investigations continue.