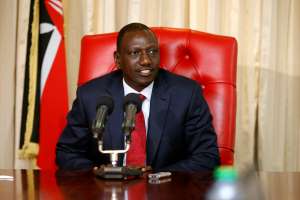 Deputy President Dr. William Ruto has now written to the Inspector General of police, Hillary Mutiymbai seeking to expedited investigations into the Sh39 billion arms deal fraud that was committed in his office.

In the letter dated February 19, 2020 addressed to the Inspector General of Police, his Chief of Staff, Ken Osinde, Dr. Ruto sent a stern warning that any of his staff found culpable should face the law.

In the scandal, former Sports Cabinet Secretary Rashid Echesa has been charged alongside three individuals, for obtaining some Sh11.5 million from foreign arms dealers, whom they duped that they were in a position to facilitate the award of a Sh39 billion military equipment tender.

Echesa was arrested last week, after walking out of the DP’s office at Harambee House Annex, where he had taken two of the foreign investors.

Ruto’s Spokesman David Mugonyi on Monday issued a statement saying the DP was not scheduled to work from Annex on the material day, and had no appointment with Echesa.

DP Ruto has asked Mutyambai to extend the investigations to the Department of Immigration to establish the visa clearance issued to the foreign investors who allegedly paid Sh11.5 million for facilitation fees to Echesa and his associates.

The Directorate of Criminal Investigations has obtained CCTV footage from Harambee House Annex for analysis, as they seek to establish who the trio interacted with.

The former Cabinet Secretary and his co-accused were freed on a Sh1 million cash bail on Monday after denying charges preferred by the DCI.