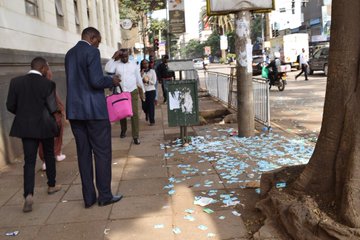 Nairobi Central Business District was littered with rubbish this morning as the county Garbage collectors today announced that they have began their strike in dramatic fashion. The move has seen the city streets choking in filth, leaving Tom Mboya street and Kenyatta Avenue a literal mess.

The workers in their trademark red overalls were seen in the morning overturning dustbins, with Kenyans widely sharing photos of solid waste all over the capital city on their social media pages.

Environment County Executive Larry Wambua pointed fingers at the Finance department, stating that supremacy battles at the office had led to funds not being released to facilitate the payments.

The disgruntled workers downed their tools over non-payment of their dues for three months.

An agreement signed between the Governor Mike Sonko-led county government and the National Youth Service (NYS) in February is yet to take effect, worsening the situation.

The one-year renewable contract was to see the NYS collect garbage in five zones; Kamukunji, Roysambu, Makadara, Embakasi East and Ruaraka. It had a provision that, however, allowed the NYS to collect in other zones as well.

City Hall explained that it opted for the NYS as their charges were lower compared to market rates.