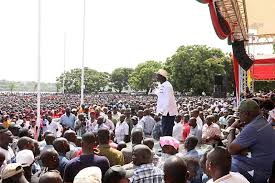 A section of church leaders want the government to substitute the songs being used to popularize the Building Bridges Initiative BBI with the National Anthem.

National Council of Churches of Kenya (NCCK) member Rev Charles Chege criticized the current common song often played during the rallies, saying that it is not based on the ideals of the country. Rev Chege pointed out that the Reggae song was composed from an entertainment point of view.

Rev. Chege says the government has to ensure the songs in use during the rally, are the type that can draw the country together and capture the spirit of patriotism.

He was speaking during a forum with Pastors who attended a BBI meeting in Kiambu County where they were taken through the BBI taskforce document by constitutional lawyers.