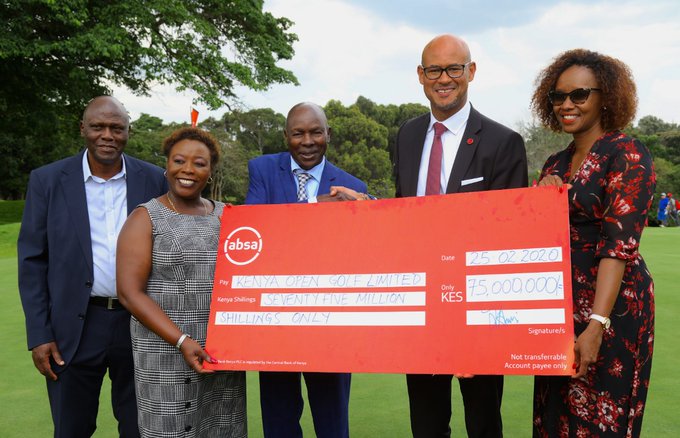 The Absa Bank Limited (Formerly Barclays Bank) has pumped Sh. 75 million into the Magical Kenya Open set for 12-15 of March.

The event will grace the prestigious European Tour for the second year running after making its debut last year.

The bank’s Chief Executive Officer Jeremy Awori could not hide his excitement as he handed over the dummy cheque to the Kenya Open Golf Limited Chairman Peter Kanyago, priding in the role Absa is taking in the competition.

“The spirit of Absa is about resilience, tenacity, drive and ambition; that is why it’s a pleasure to be here because as a Kenyan I stand proud that we are sponsoring one of the biggest golfing tournaments not only across the continent but in the whole world.

“We are shining a light on golf in Kenya and we have an opportunity to bring the best golfers from across the world to come and play in Kenyan soil and also to get a chance to broadcast the magic and beauty of Kenya to the rest of the world,” he added.

The sponsorship is part of an ongoing Sh.150 million sponsorship that was announced by Absa Group last year as the main sponsor. It also marked the 10th anniversary of the bank’s sponsorship for Kenya Open that has been growing since its inception in 2011.

“Over the past 10 years, we have walked hand in hand with the Kenya Open Golf Limited to grow the profile and stature of the Kenya Open tournament, transforming it into a great asset, not just for the golfing fraternity but also for the country.

As a result, Kenya Open is now one of the biggest sporting events in sub-Saharan Africa and has contributed immensely to the promotion of Kenya as a global golfing and sports tourism destination and we are looking forward to this year’s tournament.”