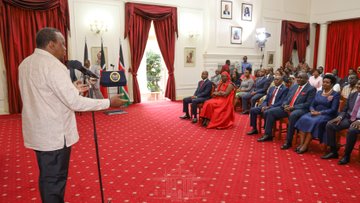 President Kenyatta has presided over the swearing in ceremony of two new Cabinet Secretaries and six Principal Secretaries, ushering them into Government.

The two Cabinet Secretaries Betty Chemutai Maina and Mutahi Kagwe were vetted by the parliament this week.

Mutahi Kagwe was nominated for the health docket as Betty Maina will be heading the trade and industrialization ministry.

Speaking at the Swearing in at State House, the president reminded the new officials of the challenges corruption and lack of integrity have posed to the country, and told them that the two vices shall not be tolerated.

The head of state assured the officials that he remains ready to work with them and support them in delivering services to Kenyans. He said those taking the oath of office were experienced public servants who should hit the road running.