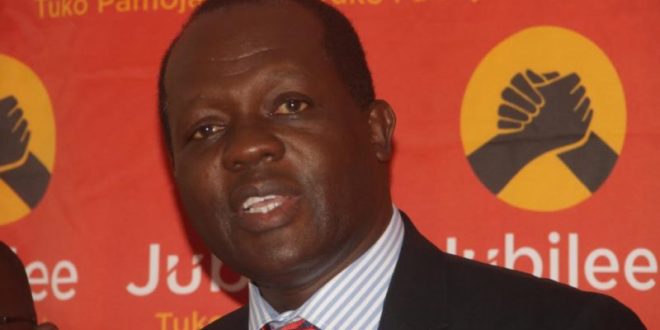 Jubilee Party Secretary General Raphael Tuju has been flown out of the country for specialized treatment. This decision was arrived at after consultations by his family and the doctors.

According to the party, Tuju who had been in the Intensive Care Unit at the Karen Hospital , had stabilized and had been moved to the general ward. The specialists doctors said they had observed tremendous improvement exhibited by the Cabinet Secretary without portfolio over the past few days.

Reports intimate that Tuju has been flown to the United Kingdom.

Jubilee Communication Director Albert Memusi had ,on Tuesday, announced that the cabinet secretary who had been immobilized for four days was now conscious and fully in control of his limbs  .

Tuju was involved in a grisly road accident last Wednesday at Kijabe Hospital while enroute to Kabarak for the burial of the late President Daniel Moi. His car collided with a matatu which was heading towards Nairobi. The  matatu had rammed into a salon car at Magina as it slowed to negotiate a junction

The matatu driver lost control of the vehicle and swerved to the right side and collided with Tuju’s Prado which was moving towards Nakuru.

Tuju had reportedly broken two ribs and had some injuries in the intestines. He also complained of difficulty in breathing. There were also fears that some of his internal organs could also have been injured during the head-on collision.

Tuju underwent an emergency surgery at Kijabe Hospital before being airlifted to Nairobi.