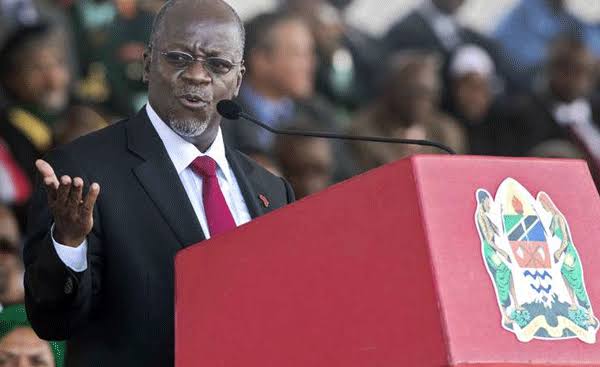 In a televised address, the country’s Vice President Samia Suluhu Hassan announced that the 61 year old Head of State, who was serving his second term in office, was pronounced dead Wednesday night while receiving treatment  for a heart condition in Tanzania.

In his message this morning President Uhuru Kenyatta declared seven days of national mourning following the death of the Tanzania President and directed that during the mourning period, the flag of the East African community and that of Kenya shall be flown at half mast.

In a media address from State House, Kenyatta said that Magufuli will be remembered for his visionary and passionate leadership that steered the East African Community to closer integration.

The President said that in the death of Magufuli he had lost a friend, a colleague, and a visionary ally with whom he worked with closely, particularly on their commitment to forge lasting bonds between Kenya and Tanzania.

Deputy president William Ruto also mourned the late leader saying that President Magufuli will always be remembered as a decisive, bold and fearless visionary who was always powered by the courage of his convictions.

Dr Ruto remembered Magufuli as one who easily broke with any orthodoxies in governement and management that he considered unimaginative, inefficient, mediocre or corrupt.

In the statement, Dr Ruto said that Dr Magufuli leaves behind a strong legacy of a responsive public service in touch with the people’s needs and dedicated to providing efficient solutions to national problems.

ODM leader Raila Odinga on his part has eulogized the late president saying that he has learnt of the passing of Magufuli with sorrow.

Odinga who is in isolation after admission for covid, says that Magufuli and his family were personal friends of his over a long time and prayed to God for strength for his family.

In his message, Mudavadi said Magufuli was a dedicated and focused leader who will be remembered as a strict and no-nonsense person who stood for good governance, integrity and stronger service delivery within the civil service. He added that the Tanzanian leader was also a strong advocate for economic growth in Tanzania and the East African region in general, and was much loved within the region for his fantastic sense of humour, candour and straight talking nature.

On his part, Ugandan President Yoweri Museveni said he was greatly saddened to learnt of the death of President John Pombe Magufuli. He descibed Magufuli as a a pragmatic leader who believed in and worked for the economic empowerment of East Africans. He said Uganda joins Tanzania in mourning the passing of a great son of Africa.

Following the death of President Magufuli, Vice President Samia Suluhu Hassan,  is set to be sworn in, in the next 24 hours, since the Tanzanian constitution does not allow a vacuum.

According to the Tanzanian Constitution Article 37(5), Suluhu is set to assume full powers as head of state, and become president for the unexpired period of the 5 year term that Magufuli begun serving last year upon winning the elections. Samia will however, not be an acting president.

As per the constitution, she will be able to appoint a full cabinet and even change some of President Magufuli’s policies. 61 year old Samia effectively becomes the second female head of state in East Africa, after Sylvie Kinigi, who acted as President in Burundi between October 1993 and February 1994. Suluhu will thereafter consult with her political party to propose a new vice president.

Speaking from Belgium, exiled opposition leader Tundu Lisu, who had since last week, vocally inquired over the whereabouts of President Magufuli, sparking the conversation on social media,   said he was not surprised with the announcement of Magufuli’s death as all indications were that he was not faring well in his health.

Lisu said that he will now return to Tanzania saying its time for the country to implement justice and reconciliation after Maguuli’s government if the country was to make meaningful progress.