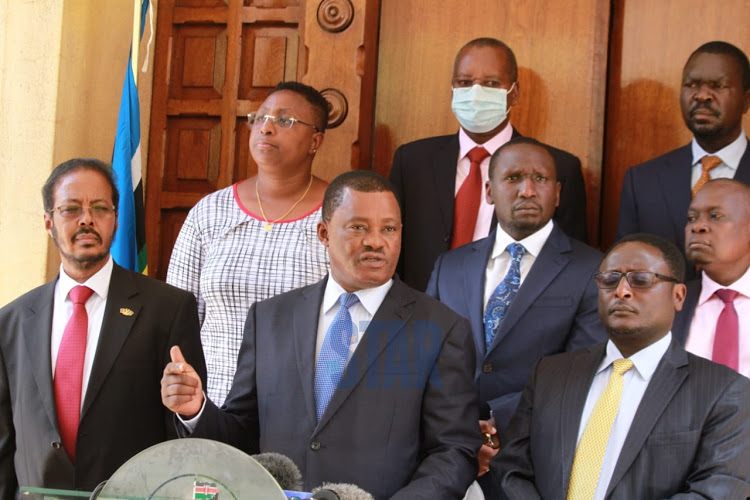 National Assembly Speaker Justin Muturi called for calm to avert national anxiety as the government seeks an appropriate response to the Chief Justice’s advisory on the unmet gender rule.

Muturi said the Parliamentary Service commission will proceed to the high court to challenge the matter, pointing out that the Chief Justice is bent on plunging the country into a Constitutional crisis without exercising wisdom and circumspection of the high office he holds.

Muturi was speaking after a special meeting of the Parliamentary Service Commission which was unanimous that, “the action taken by the Chief Justice is ill advised, premature and unconstitutional and is recipe for plunging the Country into a constitutional crisis of monumental proportions.”

Muturi says they will be seeking legal redress accusing the Chief Justice of trying to plunge the Country into a constitutional crisis, without exercising the wisdom of the high office he holds.

While quoting article 102 of the constitution, the speaker said the law was clear on the term of each house of parliament which he says expires after the election of new members of Parliament.

Muturi added that there are two petitions at the High Court set for hearing on 7th October to determine whether the order made by Justice John Mativo on 29th March 2017 during the tenure of the 11th Parliament is applicable in the 12th Parliament which was elected in August 2017.

He says it is premature for the Chief Justice to take such action while the High Court is yet to determine the matter.

“The Parliamentary Service Commission on the request of the two Speakers has resolved to engage counsel to immediately proceed to the High Court pursuant to Article 165(3) of the constitution to challenge the unlawful action taken by the Chief Justice,” Muturi said.

Chief Justice David Maraga on Monday wrote to President Uhuru Kenyatta seeking the dissolution of parliament, on grounds that Parliament has refused to comply with the High Court order to enact legislation required to implement the two-thirds gender rule for over nine years.

Maraga was responding following six petitions seeking his advice on the matter saying the petitions that were received between April 2019 and July 2020 had been consolidated into one.

In an advisory to the president, the Chief Justice says it is incontestable that Parliament has not complied with the High Court order in Constitutional Petition No. 371 of 2016.

The Constitution leaves the President with no option but to dissolve Parliament. If he does, the Speaker will declare all seats vacant and notify IEBC within 21 days and elections be held within 90 days