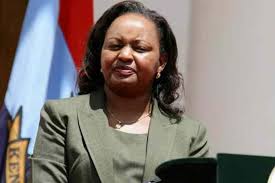 Impeached Kirinyaga governor Anne Waiguru’s troubles seem far from over after the Ethics and Anti Corruption Commisssion announced it has launched investigations against her.

EACC Central Region Head, Charles Rasugu, said that they have launched investigations against Waiguru in the awarding a Ksh50 million tender to Velocity Partners Limited, a company said to be related to Waiguru’s relatives.Further, Rasugu said the commission is also investigating the irregular payment of travel allowances to some of the staff a day after her impeachment. Twenty three (23) out of the 33-member County Assembly voted in favour of Governor Waiguru’s removal.

Kirinyaga County Assembly Speaker, Anthony Gathumbi has made a formal communication to the speaker of the Senate Ken Lusaka on the impeachment motion against the area Governor Anne Waiguru. Defending the move that has provoked varied opinions, Gathumbi said Governor Waiguru declined to appear before the assembly prompting the county to proceed with the motion

While confirming he had received the formal report on the impeachment motion, Speaker Lusaka said he has convened a special Senate Business Committee at 2.30 pm on Thursday to determine the way forward. Lusaka assured that the senate will hear the submissions contained in the motion and act accordingly devoid of sideshows.

Governor Waiguru on her part, has moved to court seeking to stop her ouster. Waiguru is seeking conservatory orders barring her impeachment and preventing MCA’s from discussing the motion.