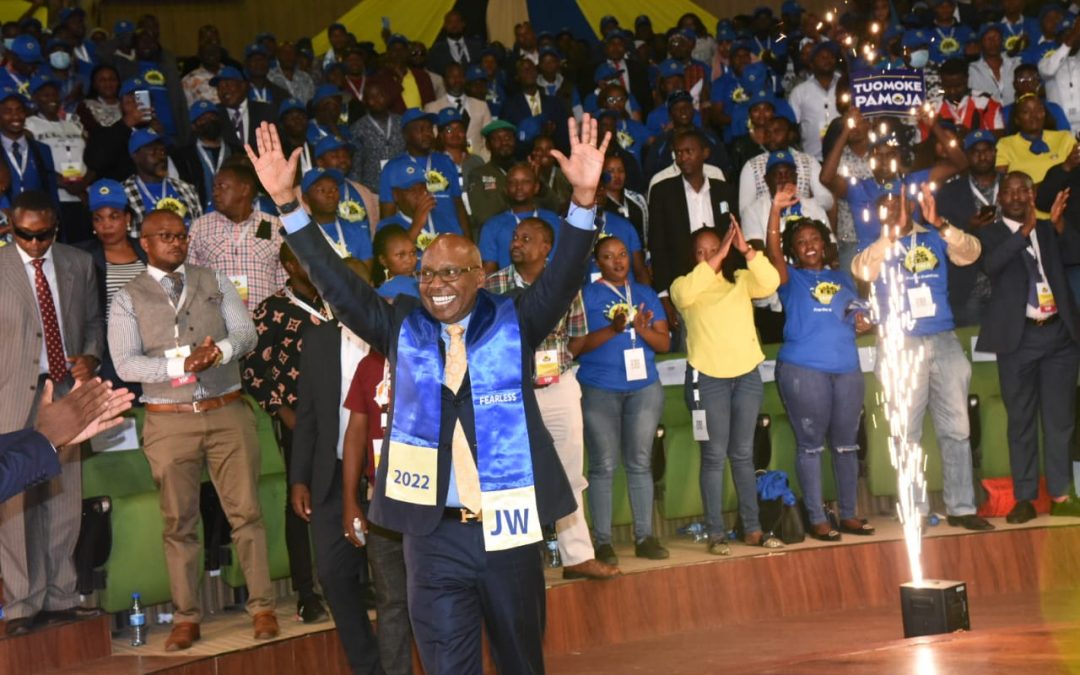 Safina party has indicated that it will not hesitate to work together with Deputy President William Ruto’s UDA party ahead of the August General Elections. Party leader Paul Muite said the two parties’ manifestos are the same and together they would make a great team.

Muite was speaking at the Bomas of Kenya during the Party’s National Delegates Conference, as the party endorsed Jimi Wanjigi as their presidential candidate.

In his acceptance speech, Wanjigi pledged to liberate Kenya from the ever growing economic debt once elected the next president.

“I accept this task with a deep obligation, unshakable resolve and complete dedication, all the while being very aware of its burdens and decisive importance – together we will build firm foundations for a better, proud and stronger Kenya. Our goal is very clear:  we are an instrument of transformational change – seismic change – we are ushering the Itwika in this country: a break from the old order of personalities, positions and unmitigated greed for power.  It is our resolve to give to our country a different leadership, and cementing progressive, irreversible gains in our governance and institutional arrangements – the system must be reset to ensure no one is left behind – every Kenyan, every community and every corner of this country must enjoy the fruits of our individual and collective sweat,” Wanjigi vowed.

Wanjigi further  promised to end the pain Kenyans have gone through since independence, vowing to revolutionize the economy, create a new order of civility and discipline and to punish the persons who have participated in creating impunity in the country.

“Let me announce here today that those who have played a part in the destruction of the rule of law, economy and livelihoods will one day be brought to book and held accountable. We can no longer stand by and watch passively – the current social contract has failed and collapsed. As stewards of the people, our leaders have abused the responsibility vested in them at the expense of the citizens. A new social contract and covenant must be established for Kenya to move forward to greatness”, he said.
If elected, Wanjigi said, his administration would lay great emphasis on economic revival, restore morality and dignity of every Kenyan, creating a new social order where morality discipline and respect for the rule of law prevail at all times.

He pledged to partner with the private sector in development investments, manufacturing and industrial growth, and create investment friendly environment for opportunities for Kenyan firms locally and abroad to mark a record-breaking period for attracting new productive investment into the economy.

DP Ruto attended the event at the Bomas of Kenya with the tycoon revealing that he had also invited ANC party leader Musalia Mudavadi, Wiper leader Kalonzo Musyoka, Ford Kenya leader Moses Wetangula and other leaders from across the political divide.

Wanjigi however, noted that he did not invite ODM party leader Raila Odinga whom he accused of kicking him out of his NDC a few weeks ago.