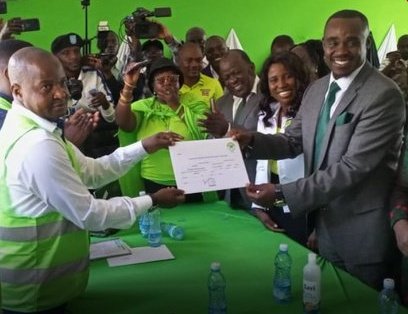 The High Court has lifted the order barring the IEBC from publishing Kakamega Senator Cleophas Malala as a Gubernatorial candidate in the August elections. The commission has now been ordered to EBC has been ordered to gazette Malala’s name with immediate effect.

This is after two voters had sought to restrain Malala from vying saying he has questionable academic papers.

The two had claimed the first-time senator and former MCA was ineligible to vie as he never graduated with a degree from United States International University Africa (USIU) and should be stopped from contesting for failing to meet the requirement of having a degree to vie for the governorship.

Justice Patrick Otieno had also thereafter dismissed an objection by the electoral body requesting to throw away a case questioning the authenticity of Malala’s academic papers.

Malala who is contesting on an ANC party ticket, and will now battle it out against six other candidates seeking to replace incumbent Wycliffe Oparanya.

Separately, the high Court has declined to stop the commission from gazeting of Malindi MP Aisha Jumwa in Kilifi Governor’s race over claims she lacked a degree.

This is after petitioners Concern Citizen Kenya, Rajab Menza Shikara and Daniel Chengo Kahindi, moved to court asking that Jumwa be disqualified from the forthcoming elections because of lack of requisite education as required under the Constitution and the Election Act.

They also wanted the court to issue orders restraining the Independent Electoral and Boundaries Commission (IEBC) from gazeting and processing her nomination papers and further clearing her to contest for governor Kilifi county on August 9.

Jumwa will now battle it out against  ODM’s Gideon Mung’aro,  lawyer George Kithi who is vying on a PAA ticket, Franco Esposito Kasoso Baya, a Kenyan of Italian Origin, who is contesting as an Independent candidate, and Engineer Dzombo Mbaru of Safina party.