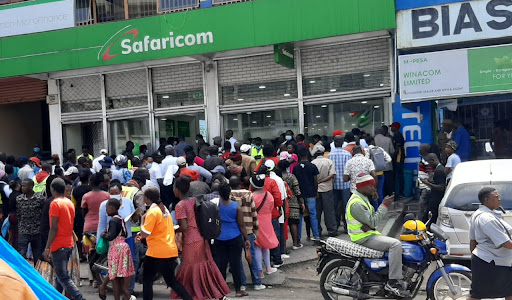 Kenyans are scrambling to beat the 15th April deadline set by the Communications Authority of Kenya (CA) to register their SIM cards or have them switched off.
Long queues have been witnessed in most telecommunications service providers’ shops, as customers sought to get their lines registered  following the directive issued by the regulator.
In the directive, the regulator had ordered mobile network operators Safaricom, Airtel, and Telkom Kenya to register their customers to avoid deactivation. Kenyans have since taken to social media castigating the move, saying it was a waste of time, since at the time of acquiring the SIM cards, they registered them.
However, CA Director General Ezra Chiloba has pointed out that the registration exercise has been ongoing since January this year hence Kenyans have had enough time to comply with the requirement.
He stated that despite there being more than 65 million SIM cards in operation in the country, the compliance rate with the registration requirement has been low, but insisted that anyone who fails to comply by April 15th will have their SIM card switched off.
However the Law Society of Kenya President  Eric Theuri has told the Communications Authority of Kenya (CAK) that it has no power to impose fines on any Kenyan who will not have registered their SIM cards by the deadline  for the exercise. Theuri says declarations to that effect are illegal, null and void.
Former LSK President Nelson Havi on his social media page, posted, “SIM cards are registered upon purchase. I believe that is elementary. What then is the purpose of the other registration? Tupunguze ujinga Serikalini tafadhali. Do not be compelled to comply with null and void directives”
On their part, the Kenya Human Rights Commission (KHRC) said, “The government  through the Communications Authority of Kenya (CAK),in a new plan, is compelling Kenyans to undertake fresh SIM card registration by directing that all persons submit to have their photographs taken and  retained. This is unlawful and a serious threat to our privacy rights against intrusive data harvesting”.
Meanwhile, Eliud Karanja Matindi, a Kenyan living in the United Kingdom has sued the Communication Authority of Kenya over the directive and wants the court to declare it as unconstitutional. He also challenged the requirement of natural persons who wish to register as mobile telephone service subscribers to submit to their photographs being taken, processed and retained as a precondition of such registration.
Matindi also claims it is against the Constitution to require mobile telephone service subscribers to disclose all mobile telephone numbers already registered to them, including with other mobile telephone service providers as part of the registration process.
This is the third time the regulator is threatening to switch off unregistered lines after similar warnings in 2012 and 2018.