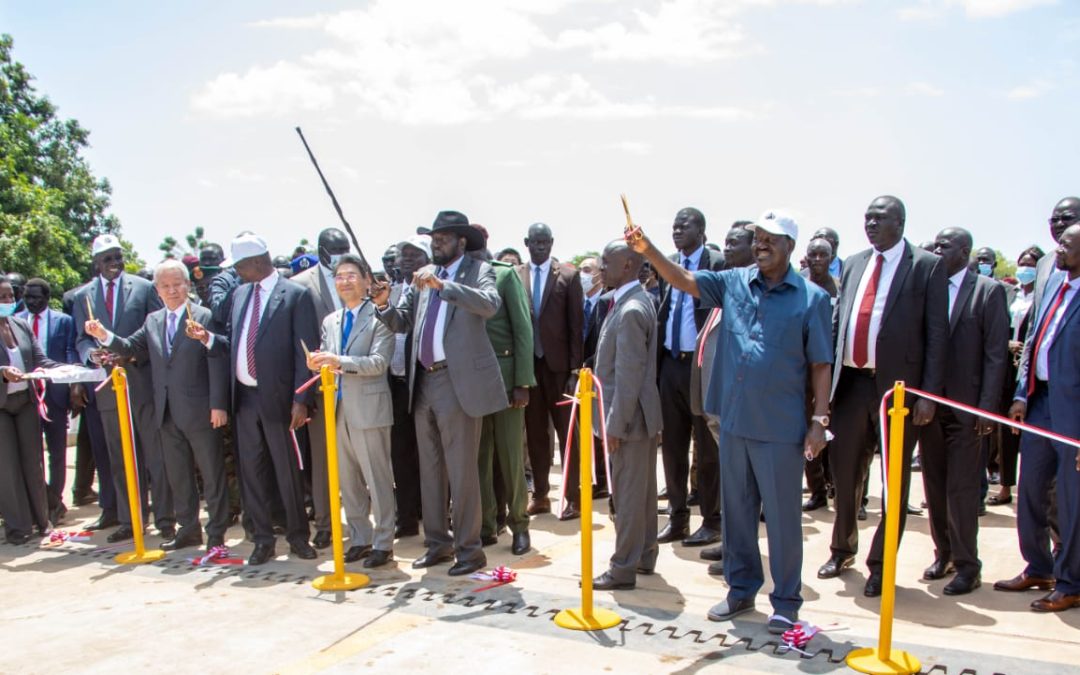 Raila announced that the bridge is now open for business, and described the move to open it as marking a great day for the people of South Sudan.

The freedom bridge is a 3.6 km Bridge connecting Gumbo to Lologo and is expected to ease traffic on the Gumbo Bridge that has gone several repairs and limited passage of heavy trucks importing goods from East Africa.

Speaking at the commissioning event by South Sudan President Salva Kiir, Raila noted that the s bridge will play a key role in enhancing connectivity and trade in East African region, adding that he was honored to see the project come to fruition.

“Every bridge built, is a relationship established. Freedom bridge will resolve fast the transport disruption and trade interruption to the people of South Sudan people and the people of East Africa,”
“With this bridge, South Sudanese will need to access the port of Mombasa or Lamu Just like Kenyan and Ugandan traders need to access Juba. This bridge is part of the answers for the quest of our traders,” Odinga said.

President Kiir said the Freedom bridge will stand as a symbol of true friendship with the people of Japan.

“I would like to thank the government and the people of Japan for this important gift for the people of South Sudan. This bridge will stand as the lastly evidence of our true friendship with the Japanese people and their government,” Kiir said.

“Your excellency, the ambassador of Japan, your country is one of the few countries that do not attach conditions to it. We appreciate this development support”, Pres. Kiir added.

The construction of the bridge cost Ksh10.5 billion, a donation from Japan. The Japanese Ambassador to South Sudan, Ambassador Naohiro Tsutsumi asked South Sudanese to protect the bridge.

Thousands of Juba residents turned up for the commissioning of the bridge.

The bridge has seen setbacks twice caused by conflict between South Sudan and the Japanese constructors which led to the workers evacuation in 2016. It later continued in 2019 but shortly after the Covid 19 pandemic hit, forcing another evacuation.