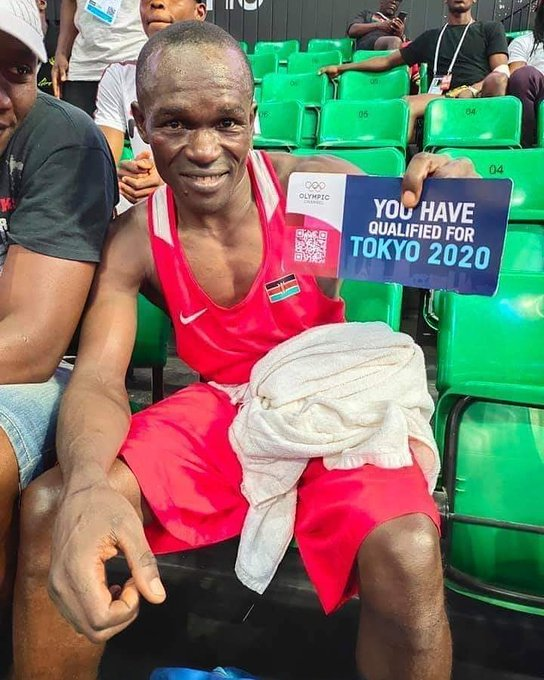 Kenya’s  Nick’ Commander’ Okoth has become the first Kenyan boxer to secure  a slot at the 2020 Tokyo Olympics after whitewashing Uganda’s Isaac Masembe in the featherweight division at the qualifiers in Dakar, Senegal on Wednesday night.

Okoth literally led from the front, landing important blows on the Ugandan to return to the Olympics after missing the last two editions in London 2012 and Rio 2016.

Okoth took a commanding lead from the start and won on a unanimous points decision.

He carded 10 against nine for the Ugandan from all the judges in the first round. In the second, he carded 10 from four of the judges while one gave him a nine against 10 for Masembe.

Earlier, Kenya’s Christine Ongare had seen her hope reduced after losing to tournament third seed Rabab Cheddar from Morocco who used her height advantage to outbox the Kenyan in their flyweight category.

Ongare will now have a final assault at an Olympic slot when she steps on the canvas against Uganda’s Catherine Nanziri in the box off on Thursday.

Elizabeth Akinyi also saw her semi-final bout end in defeat, but she had to endure the three rounds with a shoulder injury and a non-fitting headgear to give the advantage to her Moroccan counterpart Bel Ahbib Oumayma in the welter category.

Akinyi lost against the reigning African Continental Cup gold medalist who prevailed on a unanimous points decision after carding a maximum 10 in all the three rounds.

In the men’s heavyweight division, Elly Ajowi could not withstand the heavy punches from Morocco’s Younes Baala as he also lost on a unanimous decision.

The two will also have a final shot at the Olympics in the box-off for third place.