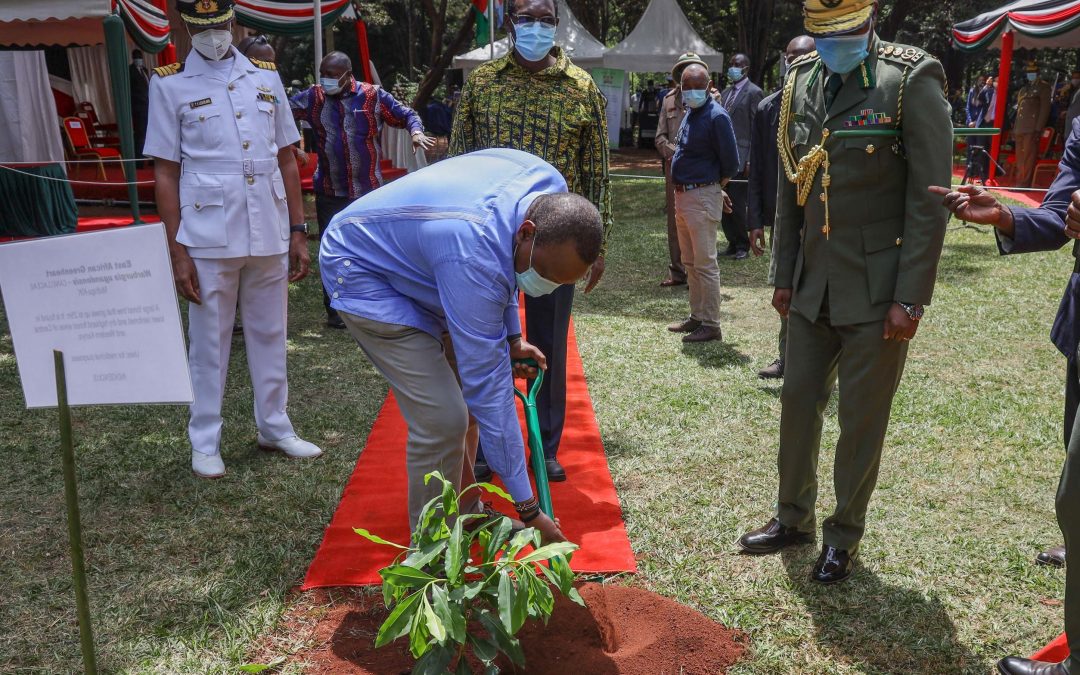 President Uhuru Kenyatta has urged Kenyans to emulate the late Professor Wangari Maathai passion and achievements in the conservation of the environment. The President said it is the conservation efforts of great Kenyans like the late Nobel Laureate that the country remains one of the most bio-diverse nations in the world.

He said Kenya is proud to have made great strides towards sustainable development, restoration and preservation of its biodiversity and challenged Kenyans to ensure that the heritage they have is protected and  bequeathed to future generations as a gift.

“It is in recognition of these riches that drove the Nobel Peace Laureate, Professor Wangari Maathai, to celebrate our environment and to dedicate herself to protecting it.  We must emulate Wangari’s example, and show by our stewardship that we too are worthy heirs,” the President said.

The Head of State spoke at the Nairobi Arboretum where he led government and private sector representatives in a tree planting exercise to commemorate this year’s World Environment Day.

During the event, the President also witnessed the ground-breaking for the development of a borehole that will assist in the setting up of a one million tree nursery in the park.

World Environment Day is observed on 5th of June every year and has been celebrated for the last 45 years. It is the United Nations’ flagship day for promoting worldwide awareness and action for the environment.

President Kenyatta said the government is fully committed to the conservation agenda and listed a number of ongoing initiatives among them the restoration of Michuki Park, the expansion of Nairobi National Park and the reclamation of grabbed forest land. He said the Government is working overtime to expand green areas across the country.

“We are also reclaiming our Ngong Forest and we are going to start the process of fencing it and ensuring that it is also available not only for present but for future generations.

“We have done in the last one month another 2,000 acres for Nairobi National Park and this is what we want to continue doing including restoration of various green areas among them rehabilitation of City Park,” the President said.

He underscored the key role forests play as a reservoir of biodiversity saying Kenya is on course to achieving the 10 percent national tree cover target. As parts of the Government’s conservation agenda, the President said all major infrastructure projects including the Standard Gauge Railway are being implemented in a manner that ensures that biodiversity is not tampered with.

“As a Government, we have also taken steps to ensure that the infrastructure projects being implemented, which are a key driver of economic growth, do not cause any degradation to our natural habitats and biodiversity,” President Kenyatta said.

He said the Government continues to expand the number and size of conservancies, arboreta, parks and wildlife reserves so as to ensure the country’s botanical and zoological diversity is maintained.

The President called for closer cooperation between government entities, the private sector and local communities saying such collaborations have enabled Kenya to register a fall in wildlife poaching incidents, illegal logging and human-wildlife conflicts.

Commending on the conservation projects being undertaken in Nairobi County, the President urged Governor Mike Sonko to work very closely with the Nairobi Metropolitan Service team led by Major General Mohamed Badi so as to ensure quick turnaround of the interventions.

In his remarks, EU envoy Simion Mordue said through the European Union Investment Bank, Kenya has been allocated 300 million Euros as an emergency response package to assist in the fight against Covid-19.

Safaricom CEO said his organization has partnered with the Kenya Forest Service in an initiative that will see the two institutions plant five million trees in the next five years.