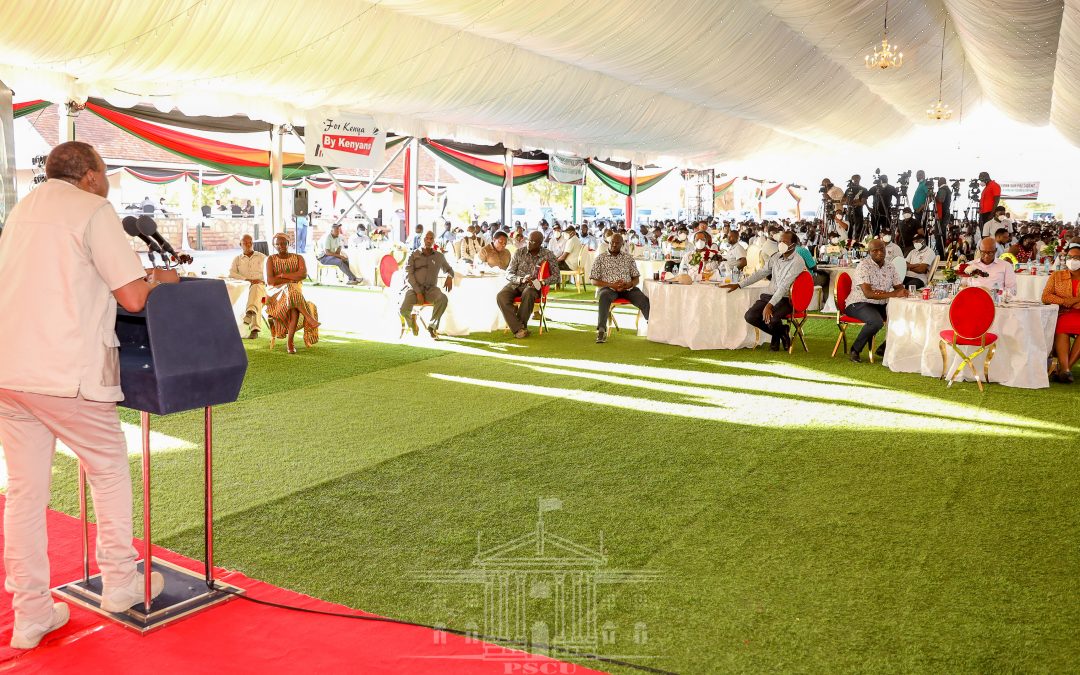 President Uhuru Kenyatta has commended the youth for being at the forefront in technological developments that are set to transform the country through the provision of local solutions.

The President expressed confidence that through the brilliant young people’s innovations, the country is achieving its goal of digitizing the economy, the society and government to create a transparent system for more efficient delivery of services to Kenyans.

“By this time next year when all our geospatial maps are done and we have finished the work of mapping the underground resources that Kenya has and when we continue to role out the digital platforms, Kenya will never be the same again.

“Indeed, Kenya will be clearly set on the path of true transformation and transformation that is not imported but built and developed by our own young people. This is something that I am truly proud of,” the President said.

The exhibition under the theme ‘For Kenya, By Kenyans’ featured geospatial, airborne geophysical, cyber and national security industrialization projects.

President Kenyatta pointed out that contrary to the view held by some people, the Government is not using foreign firms to deliver some of its key programs such as Huduma Namba and last year’s population census exercise.

“It is these brilliant young men and women, who just with a little bit of financial support,and using their ingenuity, have helped us to develop a platform that allowed us to do our Census and deliver the results (of a Census) in record time until we have countries from all over Africa including Europe wanting to know , how did you manage?”, the President said.

“…Until we have countries from all over Africa including Europe wanting to know how we managed to develop that system,” the President said in reference to the successful 2019 population census.

When it comes to mapping, President Kenyatta said the young people have, for the first time in the region, done the mapping of the resources that exist in the country using only 10 percent of the Shs 30 billion that a foreign company had asked to do the same job.

“From water to gold to iron ore, we will know what our grounds hold. This is what will give us opportunity to develop these resources for the best interest of 50 million Kenyans,” the Head of State said.

“It’s our responsibility to first look inward. Anything that we need to do, let’s first look within our borders and develop that capacity from within. Not always to look out there, and see which contract am I going to give to China,America, to (the)UK..for some company to come and do and take their expertise away”, the President told Cabinet Secretaries.

On revenue collection, President Kenyatta said the geospatial work done by young people for the first time since 1972 will improve and enhance revenue collection as well as boost Government’s ability to deliver services efficiently.

Deputy President William Ruto said the multi-agency approach exhibited by the youth during their training demonstrates that with synergy no task is difficult to undertake.

“The training and mentorship is key in ensuring that this tremendous potential is turned into reality,” the Deputy President said.

The CS singled out 353 Ajira youth employment centres across the country as one of the success stories of the President’s commitment to provide the youth with opportunities to participate in nation building through digital innovations.

Earlier at the same venue, the Head of State chaired an extra-ordinary session of Cabinet during which he received a report on the state of national security, nationhood and territorial integrity.