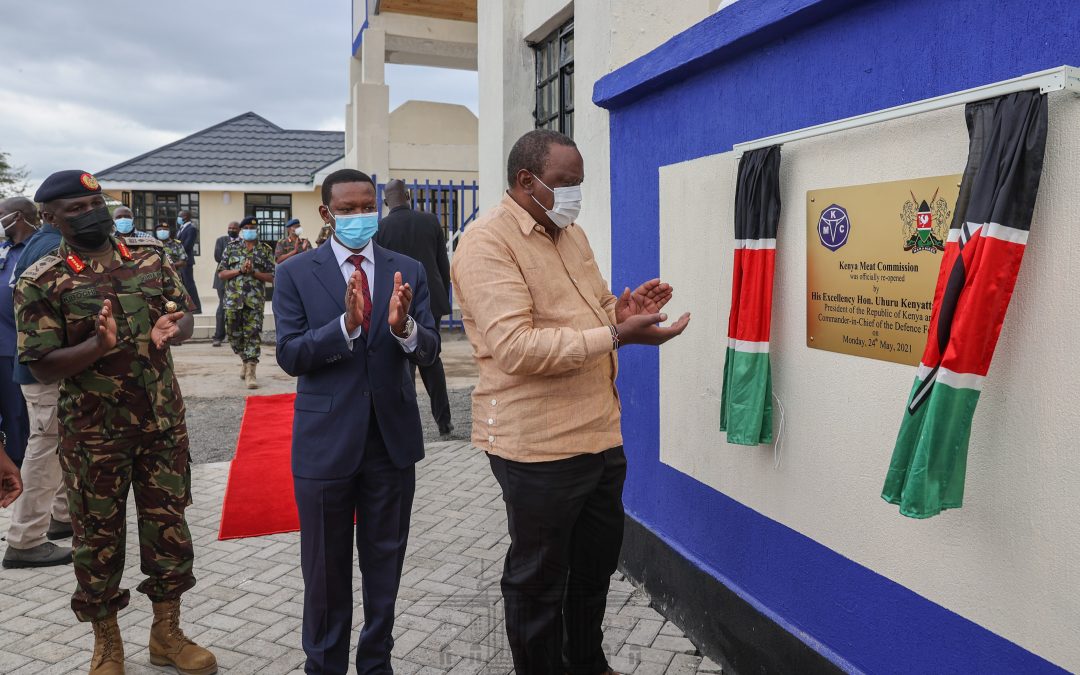 President Uhuru Kenyatta has applauded Kenya Defence Forces (KDF) for reviving Kenya Meat Commission (KMC) saying the Government’s decision to transfer the meat processor to the Ministry of Defence was aimed at salvaging the livestock sector which is a mainstay for millions of Kenyans.

“As a key stakeholder and consumer of KMC products, the stewardship provided by the Ministry of Defence provided the Commission with economies of scale, predictable product demand, better focus on efficiency, and a diversification of its product lines,” the President said.

President Kenyatta, who spoke on Monday afternoon in Athi River, Machakos County when he presided over the re-opening of the refurbished KMC factory, said over half of the country’s population depends on the livestock sector for its livelihood and that the Government could not allow it to collapse.

“As indicated earlier, the sector is the source of livelihood for millions of Kenyans and the market forces have not lived to our expectations especially in times of drought and therefore, it was necessary to get the government involved as a driver together with the existing private sector players,” the President said.

The President expressed optimism that KDF will be able to pay farmers and other suppliers in time, saying that has been one of KMC’s greatest challenge.

“One of the greatest challenges that we had with this facility was taking in livestock but not paying the farmers for the same. Indeed, some farmers had waited for four years  before they were paid.

“I am keenly looking forward to you (KDF) maintaining your pledge that all farmers will be paid within 72hours of the delivery of their livestock to your facility,” he said.

The meat processor, with an installed daily slaughter capacity of 1,250 large animals and 2,000 small stock, was transferred from the Ministry of Agriculture to that of Defence in September last year.

The President thanked KDF and the various agencies that were sourcing their meat requirements from KMC such as Kenya Prisons, Kenya Police Service Training Colleges, National Youth Service and Kenya Wildlife Service, and urged more institutions to make the meat processor their supplier of choice.

Besides the meat value chain, the President identified the leather sub sector as one of the greatest beneficiary from the revamped KMC saying the Government had a comprehensive plan to enhance the uptake of hides and skins from the factory by local tanneries.

He thanked KMC for establishing partnerships with existing abattoirs in major livestock rearing counties and urged KDF to prioritize the revival of Kibarani abattoir and Shimanzi meat depot to carter for the coastal region.

Further, the Head of State challenged KMC’s new managers to leverage on regional and continental trade arrangements such as the African Continental Free Trade Area (AfCFTA) to put their products into the international market by obtaining appropriate export certifications.

“Even as we set our eyes on Europe, Australia, New Zealand and Middle East for exports, a significant portion of our growth will be from emerging markets, many of which are right here in Africa, where the population is growing, and more consumers now enjoy improved purchasing power,” the President said.

Earlier, President Kenyatta visited KMC’s Ladhies Road Meat Depot in Nairobi County on his way to Athi River for the re-opening of the firm’s factory.

General Kibochi assured the President of KDF’s commitment to ensuring that KMC is fully revived for the benefit of all Kenyans.