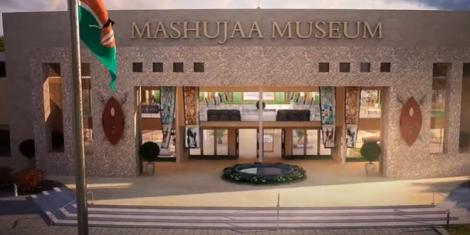 The president toured the facility that will act as an archive of Kenya’s history since 1800.The museum includes a Hall of Legends, which will showcase the lives of Kenya’s legendary ancestors including Mzee Jomo Kenyatta, Mekatilili wa Menza, Koitalel arap Samoei, Jaramogi Oginga Odinga and Nabongo Mumia among others.

The facility also has the Tunnel of Martyrs with the names of Kenyans who lost their lives during the country’s darkest moments placed on its sidewalls.

A moment of Darkness Gallery is also present where Kenya’s lowest moments are displayed, and the Museum’s Hall of Innovation which celebrates the brilliant and game-changing ideas produced by Kenyans.

Among the outstanding attractions at the new Uhuru Gardens National Monument and Museum is the military gallery with a rich display of Kenya Defence Forces weaponry, equipment and technology through the decades.

President Uhuru  had revealed that the museum construction was inspired and the concept guided by  Azimio La Umoja One Kenya coalition presidential aspirant Raila Odinga.

Uhuru gardens was officially declared a National Monument in 1966 because of their historical importance.

Kenya’s first Independence celebrations were held at the site with the first Kenyan flag was raised, in December 1963, marking the nation’s independence.

The Uhuru Gardens National Monument had been  closed since June 2021  to improve, conserve and preserve the monuments.

This comes as president Kenyatta is set to tomorrow preside over this Year’s Madaraka Day Celebrations which will be his last national celebration as the Head of State.

The government has asked Kenyans planning to attend tomorrow’s Madaraka Day celebrations to observe all the Covid-19 measures put in place by the Ministry of Health including wearing a face mask.

Members of the public will have access to Uhuru Gardens from 6:00 am with at least 30,000 people are expected to attend the national event.