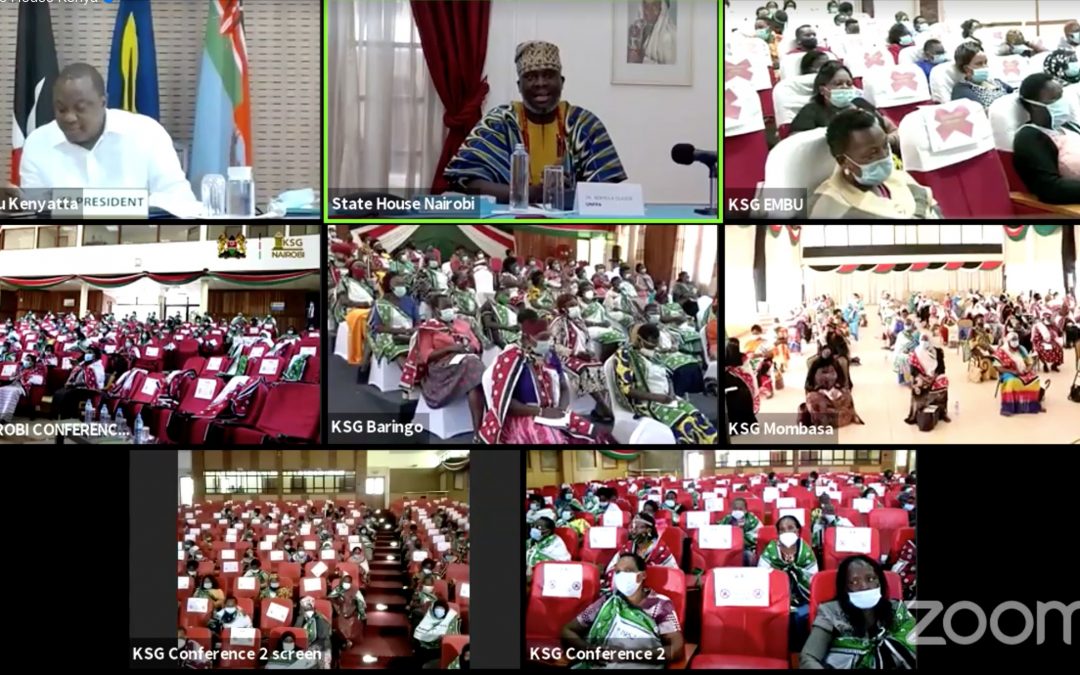 President Uhuru Kenyatta has commended Maendeleo ya Wanawake Organization (MYWO) for its frontline role in fighting for women’s rights in Kenya.

President Kenyatta noted that MYWO has grown to become a bastion of civil society, championing initiatives that have tremendously changed women’s lives for the better, especially at the grassroots level.

“I believe the lives of women in Kenya and the communities they live in are, currently, immeasurably better thanks to the MYWO’s bold and consistent actions over the decades,” the President said.

The Head of State said he was happy MYWO was complementing Government efforts to achieve the objectives of Vision 2030 in the area of water and sanitation.

“The Vision 2030 blueprint aims at ensuring that every woman in a household at the grassroots level gets a water tank for safe, clean, and reliable water for domestic use,” the President said and directed the Ministry of Water to partner with MYWO to ensure the success of the program.

He appreciated the training MYWO offers women on smart agriculture in order to enhance food security at the household level, saying it supports the Big 4 Agenda on food security.

“As you are aware, Food and Nutrition Security is one of the Pillars of my Administration’s “Big Four” Agenda.  I chose to focus on food security because a Nation, which cannot feed its people, is not worthy its name,” the President pointed out.

The Head of State  expressed satisfaction that MYWO is working in partnerships with the Ministry of Health and the First Lady’s Beyond Zero Initiative on promoting maternal healthcare at the grassroots level.
“This has been a huge boost for our Big Four Pillar of Universal Health Coverage (UHC),” the President said.

On BBI, President Kenyatta emphasized that it proposes significant gains for women and urged them to support it.

“Through BBI, Kenya is re-imagining our nationhood and envisioning a nation where tribe, gender, age, ethnicity and religion are no longer factors for division but rather drivers of unity within diversity,” President Kenyatta said.

As an organization, President Kenyatta said Maendeleo ya Wanawake has clearly demonstrated that the empowerment of women is not merely by holding conferences in high-end hotels in Nairobi but by being vibrant at all levels especially at the grassroots.He appreciated the contribution of MYWO in curbing female genital mutilation (FGM), a cultural trait considered primitive.

“Your efforts as an organization and other like-minded organizations, made it easier for the Government of Kenya to enact the Prohibition of Female Genital Mutilation Act (2007) and established the Anti-FGM Board,” he said.

President Kenyatta also took the opportunity to urge the MYWO to use its position of influence at the grassroots to advocate for continued observation of the Ministry of Health’s anti-COVID-19 guidelines and protocols.

“As Women, you know you are great influencers of social behaviour; therefore, as Government we look to you as our partners in securing Kenya from this pandemic, and all our other social and economic challenges,” President Kenyatta said.

The President also directed the Ministry of Housing to partner with MYWO in the development of its parcels of land spread across the country and assured the organization’s membership that land ownership documents for its headquarters were intact.

She said MYWO is ready to support the process by offering civic education and support required at the grassroots level.