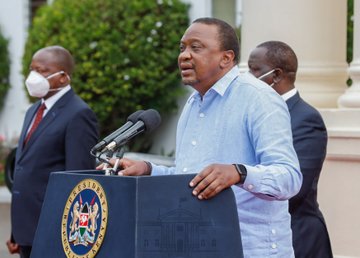 President Uhuru Kenyatta has quelled the anxiety of Kenyans who have shown concern over the rising Covid 19 numbers since the phased reopening directive on 6th June.

“My greatest concern at the moment is the aggressive surge of infections among young Kenyans who are in turn infecting their elders. Contact tracing of the recent surge of infections indicates that our socialising without regard for protective behaviour, particularly in environments serving alcohol, is becoming a high risk factor”, Pres. Uhuru said.

Following an extraordinary meeting the President Uhuru Kenyatta had with governors, the president while calling on Kenyans to continue with personal responsibility in the fight against covid 19, has directed that eateries and restaurants  should close shop at 7pm from the earlier directive that they close at 8pm.

Additionally the president says that the question of whether to save lives or livelihoods should not come up reiterating that traders should ensure that they serve only ministry of health compliant customers.

Eateries in Kenya are seen as a time for social gathering, at the onset of the pandemic they were identified as major hot spots to be looked into to curtail the spread.

There have been reports that some bars are masquerading as eateries in order to sell alcoholic beverages, something that the ministry of health has previously warned against.

In a ministry of health briefing last week, the Health Ministry  CAS Rashid Aman had warned traders that the long arm of the law would catch up with those breaking the law and selling alcohol for sit down clients as opposed to taking away services.

“I must remind Kenyans that the Government cannot police the morality of its citizens.  Citizens must balance between their individual rights and their responsibility to each other.”

“We cannot have a policeman at every street and in every village to enforce the rules.  We need, as citizens, to hold ourselves and one another accountable, “he added.

In his address to the nation,the president cleared the air regarding the issue ,stressing that the ban on sale of alcohol in eateries and restaurants is still on. Further stressing that bars should not reopen the president has put his foot down regarding bars that continue to flout the directives.

“There will be no sale of alcoholic drinks and beverages in eateries and restaurants across the Territory of the Republic of Kenya, effective at midnight today, for the next 30 days,”

“The closing time for restaurants and eateries has been amended from 8pm to 7pm, starting today at midnight, for the next 30 days. Bars shall remain closed until further notice,” Pres. Uhuru directed.

At the same time the head of state has called on law enforcers to ensure that ministry of health guidelines be adhered to especially during events. He said this even after he extended the dusk to dawn curfew by a further 30 days.

Pres. Uhuru noted that Kenyans have a false sense of comfort regarding the low number of deaths reported in the country adding that it is time that Kenyans realize the 280 deaths could rise if Kenyans are lax in following guidelines.

“The surge of the infections has continued for the last 21 days, and in some areas accelerated sharply.  The virus has now infected Kenyans in 44 counties.”

“Nationally, 17,603 persons have so far tested positive for the virus.  My greatest concern at the moment is the aggressive surge of infections among young Kenyans who are in turn infecting their elders.”

“Contact tracing of the recent surge of infections indicates that our socialising without regard for protective behaviour, particularly in environments serving alcohol, is becoming a high risk factor.”

“Those are the people who have interpreted the de-escalation of the measures as a green light to pay no heed to the guidance by our health authorities. Their reckless actions are endangering those around them, and our whole country.”

“All measures announced today shall be applied to all citizens regardless of their social or political standing. When we de-escalated 21 days ago, I said that I would not hesitate to re-escalate again if reckless behavior is widespread,” he stated.

Nonetheless, addressing the nation from the statehouse the president further urged law enforcers to ensure adherence to the guidelines by all with no favoritism including politicians.

This is after there has been public display in disregarding ministry of health guidelines. The recent weeks have seen politicians be presented before courts to answer to allegations of flouting regulations.

“That the Inspector General of Police shall ensure that his officers spare no mheshimiwa, or individual, regardless of social status or rank, who is either out after curfew or who flaunts the health protocols without being an essential worker.  The rules are for all of us, and rank or status does not exempt you from them, “he stated.