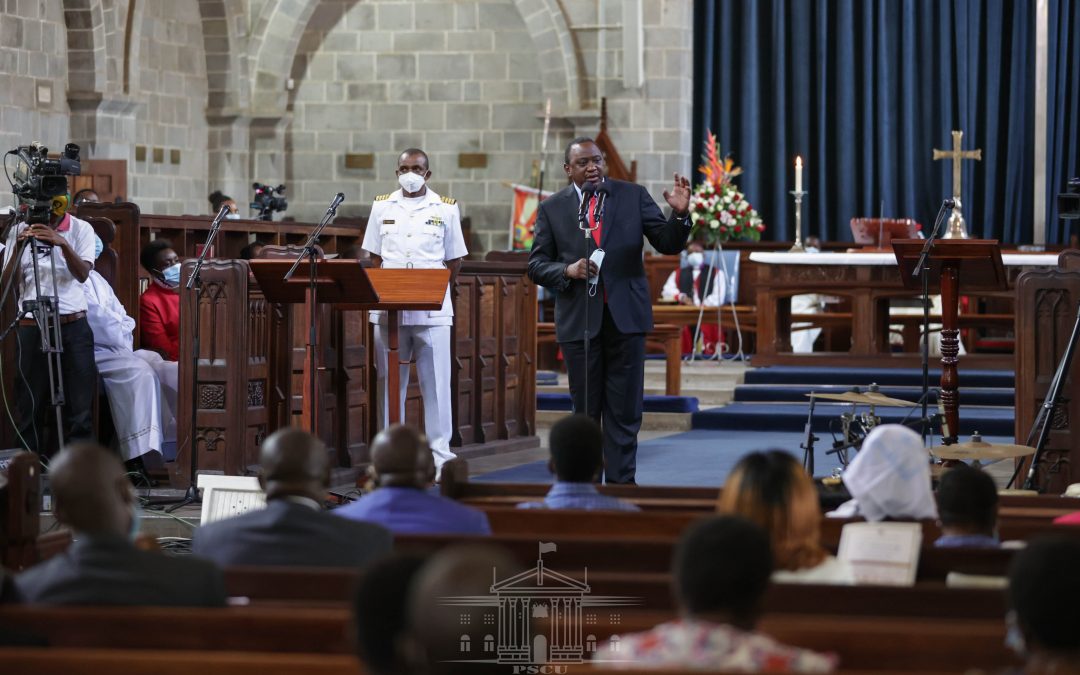 President Uhuru Kenyatta on Sunday joined worshipers in praise and worship at the All Saints’ Cathedral in Nairobi during a special Sunday Service to mark the 50th Anniversary of the Anglican Province of Kenya.

The President was received by The Most Rev. Dr. Jackson Nasoore Ole Sapit of the Anglican Church of Kenya when he arrived at All Saints’ Cathedral, Nairobi County for the Celebration Service.

The sermon was delivered by The Most Rev. Dr. Jackson Nasoore Ole Sapit, the 6th Archbishop of the Anglican Church of Kenya who spoke on the theme of “Wholesome ministry for a wholesome Nation”.

Archbishop Ole Sapit said the establishment of a commemorative chapel in honor of church missionary John Ludwig Krapf, if approved by the government,will serve as a reminder of the journey of Christianity in the country, Krapf having played a pivotal role in establishing the first mission station in Rabai.

Upon approval, Sapit said that the church will partner with the relevant authorities to gather the resources required for the construction of the chapel.

Other amenities were soon after constructed around the church compound, including a school, a clinic and space for freed slaves.

The Head of State encouraged religious institutions to continue partnering with the Government in the transformation of the country saying the church is the conscience of the nation.

The President said the Church has over the years played the role of holding the political leadership to account and encouraged the clergy to continue being the country’s “conscience”.

The head of state encouraged the church to continue adding that the church is the conscience of society’ and that there is need for the church to be at the very forefront to ensure that those in various positions will execute their mandate effectively.

“Yes you are out there to save souls but you are also out there to serve and ensure that the will of your people is followed and committed by their leaders.

“And I want to encourage you that you shouldn’t stop that but continue because as my father used to say, ‘You the church are indeed the conscience of society’ and we need you at the very forefront to ensure that we who have also been given the mandate by the people to execute on their behalf, an agenda to improve livelihoods are kept on toes,” the President said.

The ACK) traces its roots to the arrival of Anglican missionaries at the Kenyan coast in mid-19th century.

The first Kenyan ACK bishops were consecrated in 1955. Five years later, the Anglican Church of Kenya became part of the Province of East Africa.

Fifty years ago, in August 1970, the Anglican Church of Kenya became an independent province of the Anglican with the late Archbishop Festo Olang as its head.