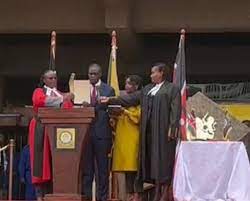 All the 45 elected county Governors and their deputies in the August 2022 General elections have this morning taken their oath of office, as they officially assume their positions.

Nairobi’s new Governor Johnson Sakaja of Kenya Kwanza, was sworn into office in a ceremony held at the Kenyatta International Convention Centre  (KICC) and attended by President-elect Dr. william Ruto

Flanked by his deputy Njoroge Muchiri, Sakaja thanked the residents of Nairobi for giving him a chance to serve them as their next Governor.  Sakaja made a special mention of his closest competitor Polycarp Igathe of Azimio la Umoja for his passion to transform the city.

In his first speech after taking oath of office, Sakaja who now takes over from Anne Kananu, said he will transform Nairobi to an epicenter of Global economic activity and a fast class county. Sakaja has further outlined his other plans including making access to water and health easier for the residents.

President-elect William Ruto attended Sakaja’s swearing in, and lauded Sakaja for acknowledging God in his clamour for the City top seat

You are a miracle candidate; it wouldn’t have happened without God. I will be on hand to support you, we have confidence in you,”Dr. Ruto said.

The President-elect made special mention by name, of all the female Governors countrywide who managed to ascend to their County’s top seats. He pledged  that the national government of Kenya will work with all the Governors in making Kenya a great nation.

“Very special congratulations to the women elected governors of the Republic of Kenya. We wish you well as you take over the responsibilities of governor in your counties”,”Dr. Ruto said.