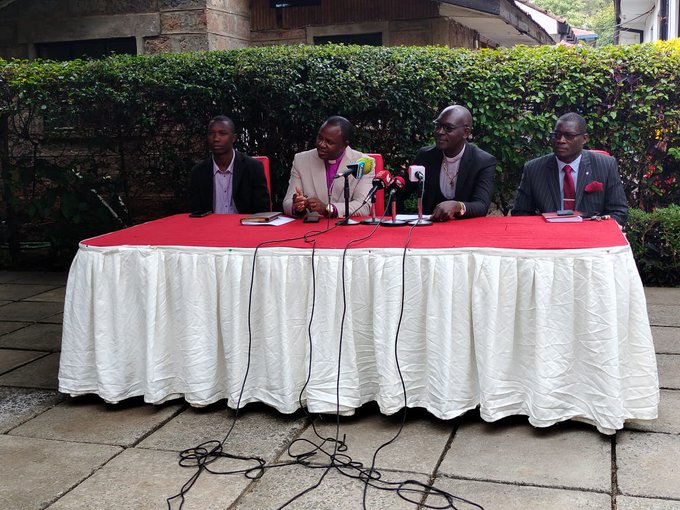 As the political drum beats get louder ahead of the 2022 General Elections in Kenya, the Church and Clergy Association of Kenya has condemned what they termed as the hijacking of  altars  by politicians to do politics, abuse opponents and utter words of hate and division.

In a statement signed by the Association’s chairman Bishop Hudson Ndeda and Secretary General Bishop Geoffrey Gichuki, the clergymen said the church will not be influenced by money from politicians, as it is central to the moral and ethical fabric of the nation.

” Those who want to support the churches should come out clear and state to the public how they would work with the church if elected. There is no time for handouts. The Church in Kenya just requires its independence and is ready to add its voice to the running of our nation”, the statement read.

The Church and Clergy Association added that they expect the General Elections will be held on the date prescribed by the Constitution, urging the electoral and Boundaries Commission IEBC to plan well and ensure smooth transfer of power and keep the  country’s political stability.

“The IEBC has decried low budget allocation, while the courts have raised its quorum hitch. These must be addressed early enough so that they don’t become excuses for failure to hold credible, free and fair elections”, the Men of the Cloth added.

And while calling for commitments by political leaders that they will play to the rules and accept the Elections results, the Association said chest thumping and heaping of emotions to the electorate should cease.

They urged politicians to be honest in their promises and respect the institutions mandated with conducting or facilitating fair elections. The also called on as many Christians and Christian leaders who are willing to venture in politics to do so saying the presence of more Christian leaders in the government will help the country heal from most political issues experienced today

Concerning the COVID 19 Vaccination, the clergymen’s association said making the vaccination drive mandatory is not right, as no one should be forced to take the jab.

“Let the population be educated and the people will decide”, the Clergymen advised, pointing out that the target of 10million people be vaccinated by end of year is a good thing.