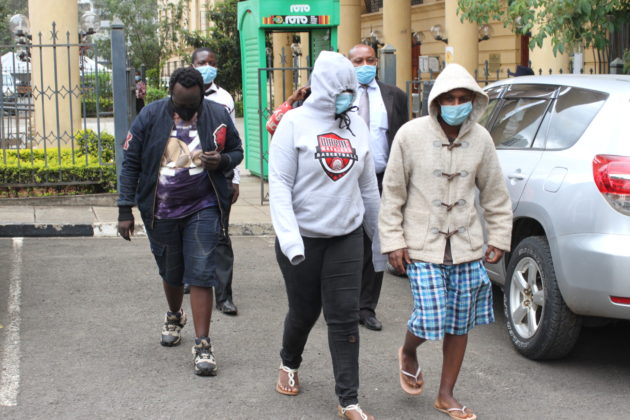 A Nairobi Magistrate court has today ordered four suspects alleged to be the organizers of the teenage party which happened at Nairobi’s Mountain View Estate last week to be charged on Thursday, December 3, 2020 .

The four have been in police custody for seven days for police conclude investigations.The Court said that it was evident what is remaining was  for the investigating officer to record statement and  conduct forensic analysis of the gadgets taken from the suspects.

Magistrate Muthoni said that the the  issues can be tackled during the  pretrial The prosecution had sought five more days saying the case was complex in nature and the investigating officer has not been able to complete the investigation within the seven days they were given.

The application was opposed by the defense saying the seven days were sufficient for the police to have completed investigations.
The court heard that the suspects would abide by the conditions set by the court and they have cooperated fully with the investigations.

The prosecution had argued that the teenagers were involved in pornography and drugs in presence of the four suspects.
The court was told that Wambui and Muthoni, who are businessmen in the Mountain View area, were involved in supplying drugs and alcohol to the 44 teenagers.

According to the prosecution, the 44 teenagers; 18 girls and 26 boys were aged between 13 to 17 years and were drawn from Kiambu, Nairobi and Machakos counties.

The DPP argued that Kithinji was aware that such a party was being held in her compound having been informed by her son who they reside with, in the same compound,” the court was told.

According to the prosecution, DCI detectives suspect that there are people who benefit from the pornographic images taken from such events hence there is a need for proper investigation to identify the said people.

“It is suspected that the respondents are part or the organizers of the event and they lure the teenagers through social media platforms i.e. Instagram, Facebook, WhatsApp and others,” read an affidavit by Julius Oguma, the investigating officer in the matter.

The four suspects will now be charged on Thursday with child trafficking, exploitation of children, exposing children to pornography among other charges.