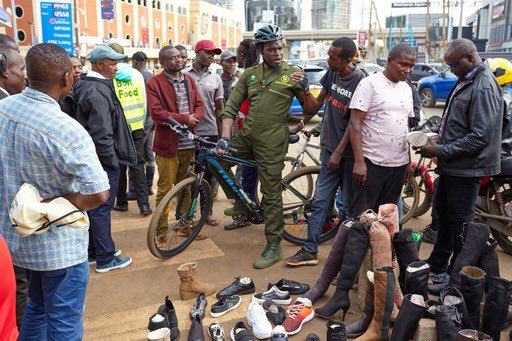 Lawyer and former Law Society of Kenya President Nelson Havi, is beating the Westlands constituency campaign trail in style, as he seeks to clinch the seat currently held by Tim Wanyonyi.

Havi is eying the seat under the Kenya Kwanza Coalition, which is led by Deputy President Dr. William Ruto, as the presidential candidate.

As the political campaigns intensified, the fuel shortage hit the country, greatly hampering the ability of motorists to move around, as the cost of petroleum and petroleum products shot up.

It was this that, perhaps inspired Havi to begin cycling, as he traversed the cosmopolitan constituency, wooing voters to consider his candidature as the August General Elections draws close.

Donning his cycling safety gear, and flanked by his support team, Havi bagan to ride down the busy Westlands roads, waving at his electorates, while those who quickly noticed him would walk by and share fists quickly with him.

Havi begun his cycling expeditions , often with members of the cycling community, led by media personality Michael Gitonga and Deputy President William Ruto’s wife , Mama Rachel Ruto , and calling for the  enacting of  laws to cyclists lanes and create awareness for cycling: physical fitness and healthy environment for all.

“In a conducive urban transport environment, which we should strive to attain as it is Europe, people, prominent ones for that matter, cycle to and from work in suits. So do I, within Parklands Ward for instance. Sports attire is necessary only for rigorous training and endurance”

It is during the cycling and meet-the-people tours that he interacts with the Westlands constituents, who are a mix of urban elite and middle class residents.

“This afternoon, I cycled around Westlands CBD in Parklands/Highridge Ward and interacted with the People of Westlands Constituency. Three significant issues came out of our conversation”, and goes on to share that his electorates had decried the deeply entrenched corruption in  the entire public procurement sector in Government resulting in poor or no service delivery to Kenyans.

Youth unemployment  was the second issue, having impoverished many Kenyans otherwise qualified and capable of working to earn an income.

The third issue was employees at the bottom strata of the trickle down economic model struggling with harsh working conditions which discriminate against them.

“I have undertaken in my 4-Point-Agenda to address these concerns not only for the benefit of the People of Westlands but all Kenyans,” Havi concluded.

Cycling aside, Havi has also declared that he has moved away from the tradition of putting up posters and billboards, that often litter the city building walls, electric poles and pathways. There will also be no loud speakers  on caravans, accompanied by dancing youths, announcing his presence, or sharing his manifestos, as most politicians are known to do.

Instead, the lawyer said he will be engaging his electorates one on one, as he cycles.

Havi quotes Plato in one of his posts,

“If you do not take an interest in the affairs of your government, then you are doomed to live under the rule of fools.”