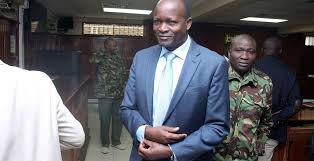 The Migori county assembly has been given the green light to impeach governor Okoth Obado.The move comes after Governor Obado was barred from accessing his office after he was charged with over 28 counts of misappropriation of county funds .

“The party in consultations with County MCAs has resolved to have a motion of impeachment against the Governor initiated immediately and have the Deputy Governor take over,” ODM said.

Their decision comes a day after Obado and his four children were charged with Ksh.73million fraud offenses. Obado has been barred from accessing the Migori County office. He has also been ordered to surrender his passports to the court, not travel outside the country and not interfere with witnesses.

ODM party which has a majority membership in the county assembly yesterday resolved to embark on the move to impeach the governor, accusing him of sidelining his deputy Nelson Mahanga and stripping him of any responsibilities in the running of the county.

ODM party chairman John Mbadi convened the consultative meeting that was attended by 37 out of 41 MCAs.

County Assembly speaker Boaz Okoth also resumed duty yesterday after being on sick leave. Okoth said he is now in good health after undergoing treatment and ready to transact the county assembly businesses. He however noted that the county assembly will issue a statement in due course regarding the situation and urged Migori residents to remain calm.