No government support over destruction due to unrest, schools now told 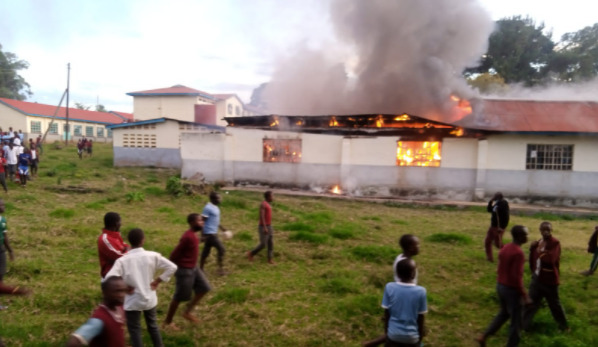 Education Cabinet Secretary Prof. George Magoha, has issued a directive on the burning down  of schools during students unrest, stating that the government will not shoulder any responsibilities on the losses incurred.

This follows the recent spike in fire incidents, which has seen dormitories, laboratories and classes go up in flames in different schools across the country.

The CS stated that the government would not contribute towards rebuilding dormitories burnt by students.This means that the school administration and the parents will be forced to meet the expenses of reconstructing.

The remarks came as yet another school , Chavakali Boys high school inVihiga was closed this morning following overnight protests by students.

Reports say the students went on rampage Wednesday night causing huge destruction in the school. They also reportedly slaughtered a bull, roasted  the meat and shared among themselves.

Images shared on social media showed one of the school dormitories up in flames, as another showed broken windows in various classrooms and the school bus. Firefighters from Vihiga County government responded to the scene to contain the inferno.

On Tuesday, a fire broke out at the Buru buru girls secondary school in Nairobi county and razed down a dormitory. The students had to be rushed to the nearby Metropolitan hospital where they were treated and discharged. Social media images had shown the girls jumping from dormitory windows to escape the fire.

On the same day,  a fire at the Moi Girls, in Marsabit county. Sigalame Boys, Kabaka High School, and Gendia Secondary School  all experience fires in different incidences last week.

Just yesterday Ministry of Education  announced that all learners both in primary and secondary schools must proceed on midterm break, as  it was necessary for the learners including those in day schools to take some time off to be with their parents and guardians.
The Ministry of Education announced the dates for a four-day break for secondary schools starting 19th of November following incidences of fire outbreaks across the country.
The revised  school calendar, that was accommodating the disruption occasioned by the COVID 19 pandemic, had excluded the mid-term break in the calendar provided to schools and students were to break for holidays on December 23.
At the floor of the Senate , Machakos Senator Kiio Wambua sought a statement from the Committee on Education regarding the ongoing student unrest and rising cases of fire in Secondary Schools across the country.
Sen. Mutua said a Education Comittee should investigate the factors behind the ongoing unrest in schools such as Buru Buru Girls, Chavakali Boys, Moi Girls in Marsabit and Singalame Boys among others that have led to dormitories being set on fire causing injuiries to students, including one reported death.
He urged the committee to outline the proactive measures the Ministry of Education has put in place to ensure a smooth learning environment in schools.
The Senator also asked the committee to state the measures the Ministry has put in place to ease the pressure on learners occasioned by the prolonged school calendar aimed at recovering time that was lost last year when schools were shut due to Covid-19.