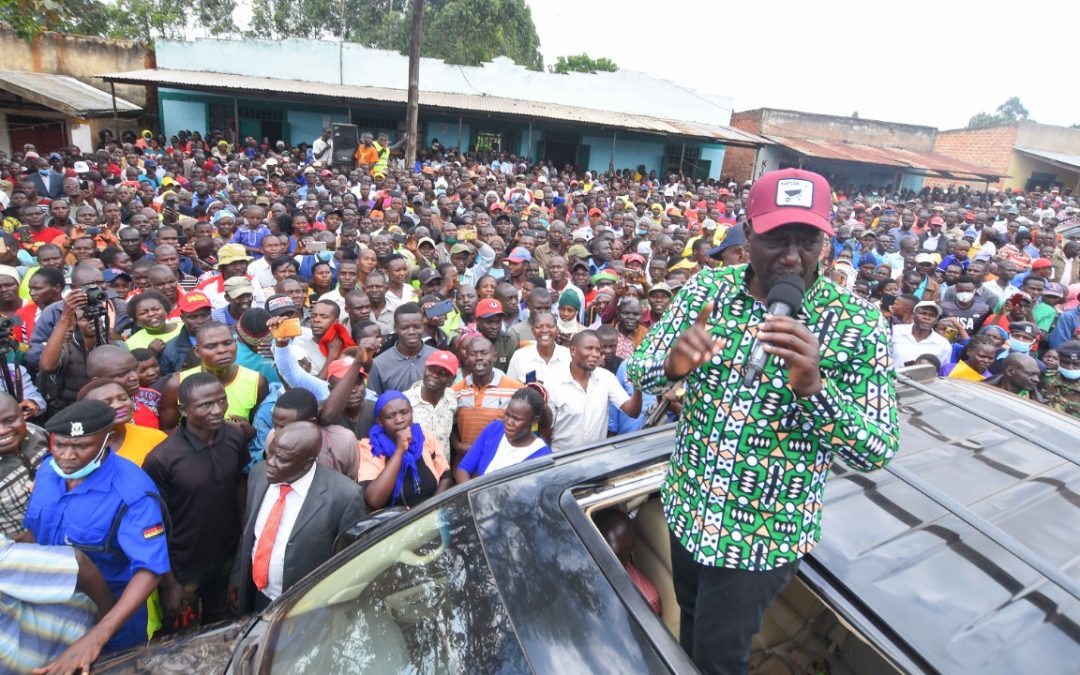 Deputy President William Ruto has said none of his competitors was ready to face him because they lacked agenda for the country.

He said his competitors were still hiding behind President Uhuru Kenyatta ‘perhaps waiting for endorsements’.

Speaking in various stopovers including Naitiri, Kamukuywa, Ndivisi,  Matisi, Nalondo, Angurai and Kamolo during his empowerment tour of Bungoma and Busia Counties on Thursday, Dr Ruto told his competitors to come up with their agenda and face him.

“My competitors are still hiding behind President Uhuru Kenyatta  and are not ready to face me because they don’t have any agenda for Kenyans,”said Dr Ruto.

“If they are serious, they should stop banking on support from  President Kenyatta and face him. They should allow the President to implement his legacy projects instead of disturbing him.”

Dr Ruto wondered why his competitors were busy criticizing UDA’s Bottom up economic model instead of coming with their own.

“There is no need for my competitors to criticize our Bottom up economic model that aims to empower majority of ordinary citizens. They should simply come up with their own agenda,” said Dr Ruto.

At the same time, the Deputy President, said it was time to end politics of conmanship and betrayal.

He told his detractors to stop using deceitful political tactics aimed at tarnishing his reputation and instead sell their agenda to the people.

The MPs told those those criticizing UDA’s Bottom up economic model to instead come up with their own agendas.

“It’s sickening that instead of our opponents selling their agenda to Kenyans, they are busy criticizing our own. They should style up,” said Mabonga.

The legislators told the Jubilee administration to stop wasting time and resources fighting leaders who left the party long time ago.

“We understand Jubilee Party wants to meet to expel some MPs who moved out of the party long time ago. How do you expel people who are no longer with you?” asked Washiali.

The MPs urged the Luhya community to support Dr Ruto for presidency, saying he was the only candidate who was committed to addressing challenges facing ordinary Kenyans.

“I want to ask the Luhya people not to be misled to support individuals who will end up being in Opposition after 2022. Our sure bet is Dr William Ruto. We are confident that UDA will form the next government,” said Barasa.