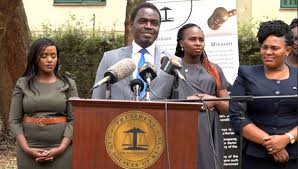 The Law Society of Kenya has weighed in on the advisory by the Chief Justice David Maraga to President Uhuru Kenyatta to dissolve parliament for failure to enact the two thirds gender rule as envisioned in the constitution.

Addressing the press at their LSK offices in Lavington , Nairobi, fhe lawyers’ body said there is need for the country to chart the way forward given the possibility to subvert the rule of law further, by leaders elected into constitutional offices.

In their statement read by LSK President Nelson Havi, the lawyers’ body said parliament is unlawful and shall not conduct business beyond the 12th of October, 2020. Havi said this is in asserting the legal position on what must be done following the Chief Justice’ advisory.

Havi urged the Parliamentary Service Commission to effect the move, saying  the legislators will no longer have authority to discharge their mandate following the advisory issued by the chief Justice over the unmet two thirds gender rule.

“This is necessitated by the fast emerging trend by certain individuals to belittle, berate and castigate the Chief Justice fir having advised the dissolution of parliament, as mandated by the constitution of Kenya,” Havi said.

He went ahead to name the Speaker of the National Assembly Justin Muturi, saying he should have handled the matter with wisdom and leadership, as an advocate . He said Muturi’s move to rally the parliamentary service commission to resolve the matter in court.

ODM leader Raila Odinga and Amani National Congress Party leader Musalia Mudavadi who have expressed their views on the advisory .

“The President of the Republic of Kenya is duty bound to dissolve Parliament… Regardless of the President’s action or inaction Parliament will be unlawful effective of October 12, 2020. The consequence of this is that any legislative authority exercised by Parliament thereafter will be without the authority of the people of Kenya,” said Havi.

At the same time, LSK vowed to write to the United Nations, World Bank, International Monetary Fund, European Union, African Union. East African Community, other international and regional agencies and Kenya’s development partners not to transact business with the Government of Kenya where such business requires parliamentary approval and oversight.

Should the demands by the Law Society of Kenya fail to be met, Havi said they will occupy Parliament and keep it off from trespassers.

The LSK said it shall lead Kenyans to occupy parliament until a by election is held to ensure impunity does not persist.