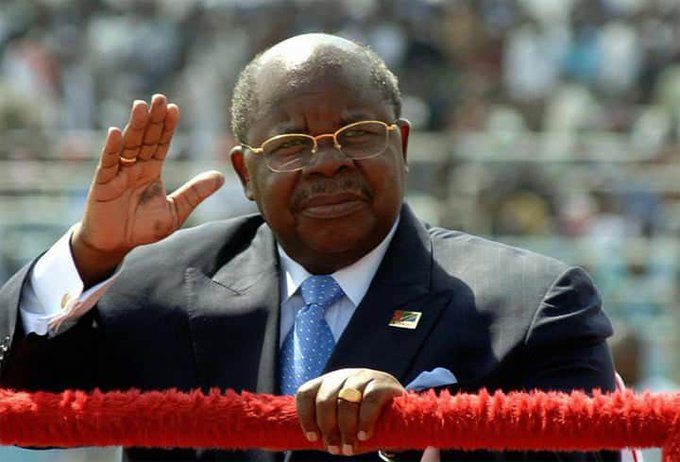 President Uhuru Kenyatta has declared three (3) days of national mourning in Kenya. In a statement, Pres. Uhuru said this is in honor of the life of the Late President Benjamin William Mkapa, the third President of the United Republic of Tanzania; and as a mark of respect and gratitude for the sterling role he played in fostering cohesion within Kenya.

The President has further declared that the Flag of the East African Community and the Flag of the Republic of Kenya shall be flown at half-mast at all Public Buildings and Public Grounds, and wherever else throughout the entire territory of the Republic of Kenya and at all of Kenya’s Diplomatic Missions abroad; from dawn on Monday, 27th July, 2020 until sunset on Wednesday, 29th July, 2020. .

Mkapa, 81, died in the early hours of Friday. He led Tanzania from 1995 to 2005 before handing over to Jakaya Mrisho Kikwete.

A somber mood has engulfed in Tanzania following the death of its third President Benjamin William Mkapa.

While making the announcement, President John Magufuli said Mkapa died at a Dar es Salaam Hospital where he was receiving treatment.

President Magufuli has declared a seven-day mourning period in Tanzania. During this time, all flags in the country will be flown at half-mast.

Magufuli eulogised Mkapa saying he will remember him for his love for the country, the fear of God and hardwork.

Kenyans will remember Mkapa for his instrumental role, as one of the eminent persons in mediating talks between Raila Odinga’s ODM and Mwai Kibaki’s PNU after the country erupted in violence following the disputed 2007 elections.

In his message of comfort, President Uhuru Kenyatta said the People of Kenya have lost a close friend and brother, who stood with Kenya during some of our darkest hours.  He went on to say that East Africa has lost a founding father of the East African Community, and the Continent of Africa has lost a dedicated Pan-Africanist who shaped the destiny of the Continent as President and even after leaving Office.

ODM party leader, Raila Odinga who on his part has celebrated Mkapa, as a great friend of the Kenyan people, a pan-Africanist, a true believer in South-South Cooperation and a global statesman adding that Africa has lost a giant.

In his message of condolence, Burund’s President Evariste Ndayishimiye prayed to God to give the strength to the family of the late Mkapa and to all the Tanzanian & African People.

Moussa Faki Mahamat, African Union Commission Chair has mourned the late former President as a statesman who will be remembered for his peace efforts in the region.