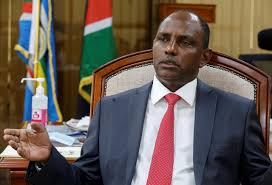 According to sources, Education Cabinet Secretary Prof.George Magoha will be taking the biggest share of the budget with a Ksh504 billion allocation.

The budget allocated to the Ministry of Education demonstrates the priority President Uhuru Kenyatta has given Prof. Magoha’s docket.

The Ministry of Transport Infrastructure came second with an allocation of Ksh189.5 billion.