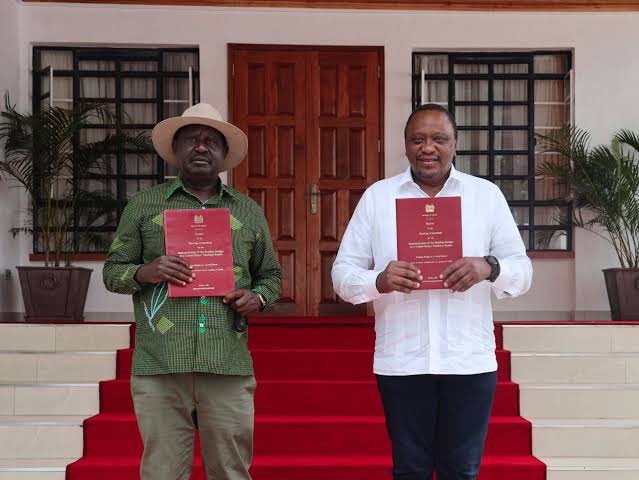 It has now emerged that the promoters of the constitutional amendment drive the BBI were Suna East MP Junet Mohammed and Building Bridges Initiative BBI secretariat co-chair Dennis Waweru , and not president Uhuru Kenyatta and his handshake partner Raila Odinga.

This has been revealed by the BBI secretariat lawyer, Atiende Amollo who now claims that anyone is allowed to support the initiative and that is what the president did.

Speaking when he was making his submission at the court of appeal during the second day of the hearing of the appeal’s case seeking to nullify the High court ruling that invalidated the BBI bill, Amollo  said that the initiative was promoted by Waweru and Junet and that the two engaged with the IEBC and collected the signatures.

President Uhuru and Raila , the key proponents of the push to change the Constitution, are seeking to convince the Court of Appeal judges to clear the road for a referendum.

“BBI is an initiative promoted by Waweru and Junet. They engaged with the IEBC and collected the signatures,” Amollo said. He said the ideas were reduced into a bill and it’s at that point that the popular initiative started.

Waweru had sworn an affidavit that is before the appellate court indicating that he was the initiator alongside Junet Mohamed.

The two had appeared before the justice, legal and administration committee in national assembly indicating that they were the promotors of the bill.

The Justice and Legal Affairs Committee JLAC report indeed shows that the two did appeared before the committee as the promoters. The lawyer said there is no such word as ‘initiator’ there is only ‘promoter’. He added that the court had also ruled that “Wanjiku” should initiate the amendment and go through all the steps involved in law from collecting signatures all the way to Parliament.

In his submission, the former attorney general Prof. Githu Muigai has said that the high court had no legal grounds to nullify the process.  Githu who is representing the IEBC has said that the only court that has that mandate is the Supreme Court.