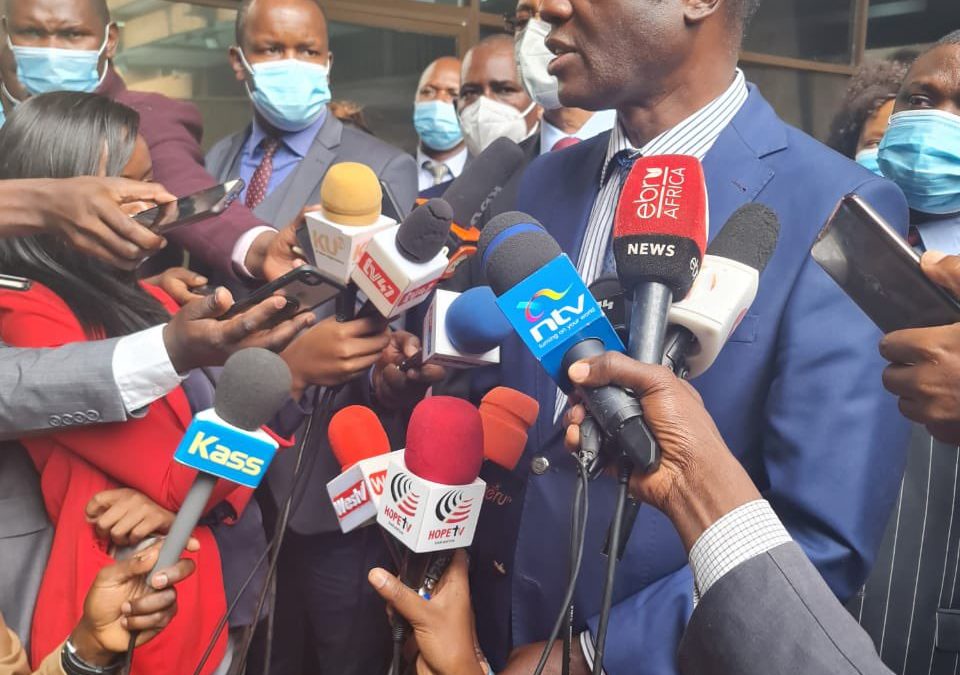 Making the announcement after a parliamentary group meeting with all Jubilee Party Senators at the KICC in Nairobi, Jubilee party Secretary General Raphael Tuju said Kang’ata was being ousted and replaced by Kiambu Senator Kimani WaMatangi at the Senate.

Addressing journalists, Tuju clarified that the accusations against Kang’ata leading to his ouster had nothing much to do with the open letter he wrote to President Uhuru Kenyatta on the unpopularity of the Building Bridges Initiative in Central Kenya. He said, Kang’ata was however guilty of not honoring summons to appear before the party’s disciplinary committee which had called him to address emerging issues.

“We have had a resolution that, Mr. Irungu Kngata ceases to be the Jubilee chief whip in the senate and is replaced by Senator WaMatangi. We had members of the senate from the Jubilee party who voiced their disapproval for that decision. We gave them a chance to articulate their opposition in  a civil manner. They have a right to be heard, but the majority of the Jubilee party allies had their way because they are more”.

“Senator Kangata has tried to give an impression that the reason why he has been relieved his responsibility as the Chief Whip int he House is to do with the letter that he wrote to the president at the beginning of this year. I want to explain that that is not the case, at least not the case currently. we had a meeting with Hon.Kangata with the leadership of the house, 8 of us, and we reached some conclusions because we did feel that whatever opinions he had to make, are within his rights as a member of the Jubilee party and he should not be vilified or punished for that” , the Secretary General told journalists.

“But the way he did it, was the question that we thought he should realize that there is decorum there are ways of addressing these issues when you want to talk tot he leadership of the party , and especially when the r leadership happens to include his excellency the president”, Tuju said.

“After that meeting, we had another meeting at the Jubilee headquarters in which we invited him, and he refused to come. And we discussed a few other confidential issues in which we put him on line to be able to talk to us. But in a most unfortunate way, he decided to discuss in closed meetings outside to the media.That was his biggest failure as far as leadership is concerned”, Tuju explained

“You dont’ kiss and tell,” he averred.

Tuju explained that the rest of the leadership in the senate were unable to trust Kang’ata as their leader due to his behavior.

These, Tuju said, were the issues that led to the party’s decision to eject him from the seat that he took over from  Nakuru Senator Susan Kihika, after she turned her loyalty to Deputy President William Ruto.

However, a defiant Kang’ata has maintained that he did nothing wrong.

“I am ready to face my accusers and accusations. The bible says what does it profit one to gain the world and lose his soul, I am here and I know there is nothing wrong that I did,” Kang’ata said.

Kang’ata joined the list of senators expelled by the party for misconduct.

However, in a swift rejoinder, the Political Parties Disputes Tribunal  suspended the decision by Jubilee Party to expel six senators.Chairperson Desma Nungo also restrained the Registrar of Political Parties from removing the name of the senators from the membership of Jubilee Party pending hearing and determination of the case .