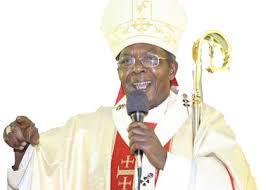 The Archbishop of Nairobi John Cardinal Njue has celebrated 34 years of God’s faithfulness since he became a Bishop, describing his priesthood journey as one full of challenges.

Bishop Njue became the first Bishop of the Catholic Diocese of Embu in 1986 following his appointment by Pope John Paul II.

The calm soft spoken Bishop Njue, has continuously called calm and peace in the country over the years always sending a strong message of love and unity.

Speaking at the Holy Family Basilica, the cleric has called on faithful to live a life full of identity and integrity urging them to be dedicated in moving the Church forward.

Father Calistus Nyangilo who delivered the Sermon during the mass described Cardinal Njue as a true servant of God who has been fully committed to serving the church.

At the same time, Cardinal Njue rebuked the utterances made by leaders in the political scene leading to a division among Kenyans adding that the unruly conduct by leaders is setting a bad example in the country.