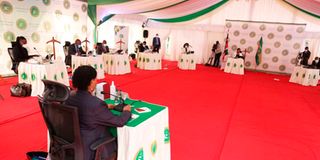 Justice Anthony Mrima and Wilfrida Okwany gave the orders on Wednesday pending the hearing of petitions filed by four petitioners. The court however said the interviews for the position of Chief Justice will go on but the commission is barred from making any deliberations once they conclude.

In one of the cases, a petitioner, Tolphin Nafula argues that Prof. Olive Mugenda was illegally elected as the interim vice chairperson of the JSC. According to Nafule, the election of the former Kenyatta University VC will relegate the acting Chief Justice to the status of an ordinary member.

Justice Anthony Murima has referred the case to the acting Chief Justice Philomena Mwilu seeking to have a bench constituted to hear the matter which he said raises substantial questions of law.

Today’s interviews saw Court of Appeal Judge William Ouko face the interviewing panel. Ouko who has a long, illustrious history, has risen through the ranks from a Registrar to an appellate judge, said that his experience as the leader of the appellate court makes him the better candidate for the position of Chief Justice.

Ouko who has over 30 years’ experience in the judiciary has said the court of appeal has been able to reduce a backlog of cases although this was derailed by the global pandemic.

He said  since joining the Judiciary in 1987, he has been able to rise through the ranks being entrusted with responsibility to lead various departments and courts which he did with distinction.

Justice Ouko who describes himself as a democratic leader says that the Supreme Court has fared well over the past 10 years and in light of criticism it should take time to evaluate its performance to determine the validity of the claims.

Tomorrow, it will be the turn of Prof. Dr. Moni Wekesa to appear before the interviewing panel. The interviews are expected to come to an end on Friday, with Alice Yano concluding the list of 10 candidates who had been shortlisted for the position that fell vacant following the retirement of David Maraga last year.