Governor Sonko fails to stop his prosecution by antigraft court 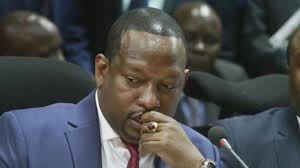 Just hours after embattled Governor Mike Sonko handed over key Nairobi County functions to National Government, he has yet again suffered another blow.

The troubled County chief took to the courts to stop his prosecution in the Sh357 million corruption case on grounds that the information that led to his arrest was acquired illegally.

In his ruling, the Anti-Corruption Court justice Douglas Ogoti said the law that Governor Sonko was relying on to challenge the access to his bank accounts was suspended by the Supreme Court.

The governor, in his application, had accused the anti-graft agency of violating the law while compiling evidence from five banks.

The lawyer claimed that his client was not notified that his accounts were being investigated.