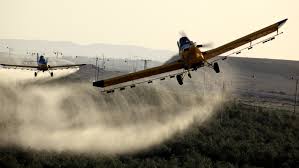 The government has acquired three extra planes to curb the spread of the desert locusts in the country.

Addressing the press at Wilson Airport Nairobi, Agriculture Cabinet Secretary Peter Munya said the planes, which are from South Africa, are currently in Mombasa could not fly to Nairobi due to poor weather conditions.

CS Munya also said that his ministry will be looking to acquire extra planes to aid in the aerial spraying exercise and the surveillance of the same. An additional 300 million shillings has also been set aside on top of the 250 million shillings already used to combat the ravenous pests that so far have been spotted in 26 counties.

The CS, says an additional 10 vehicles have been secured through FAO, to enhance ground spraying. A public sensitization campaign will also be launched tomorrow to enhance public knowledge.

The CS says they target the eradicate the pests by June. Three assessment teams will be deployed to carry out the assessment of the damage occasioned by the desert locusts invasion